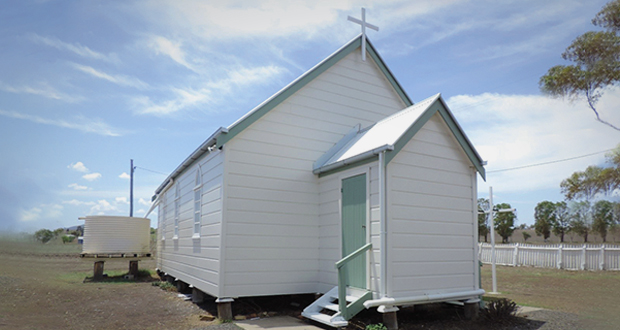 The small church in the Southern Downs district of Queensland was filled for their February service, a stark contrast to 2014 when it was earmarked for closure after its 150th anniversary celebrations.

Rev Ansie Liebenberg—Warwick Uniting Church Minister, who also ministers to Freestone Uniting Church—spoke of the changes in fortunes for the congregation.

“After arriving in Warwick in February 2016, we spoke to members of the Freestone community about some of the issues they were facing,” says Ansie. “One of the key issues was the timing of services. Given Freestone is predominantly a farming community, early morning services and evening services were not feasible.

“So, a 2pm services on Sunday afternoons was suggested. People have come from far and wide, particularly as other denominations within the region have closed.”

Rev Ansie reflected on the refurbishment project that has taken place over the past year.

“To see the building restored to its former glory is nothing short of a miracle,” says Ansie.

“As we are in the midst of one of the worst droughts the region has ever experienced, the community needs a source of hope and prayer, which is what the Uniting Church is hoping to bring.”

Presbytery Minister for The Downs Rev Yvonne McRostie is encouraged by the revival of the congregation and the positive effects for the wider community.

“To see new life in the midst of a battle against the odds here in this small community gives us all hope and is something to celebrate—and now more than ever we need hope,” says Yvonne.

“What a great message the church can give the community.”

The role of the church within the community was no more evident than during a special thanksgiving service for rain held during March, and it was during this special service where members of the predominantly farming community spoke of the church, their faith and how it helped them through difficult periods.