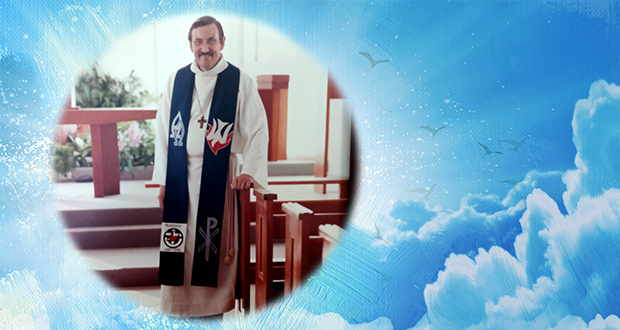 Rev Duncan Harrison—the third Moderator and second General Secretary of the Queensland Synod and a colleague of Don’s for more than 50 years—and Rev Bruce Johnson—retired Uniting Church Minister and Moderator of the Uniting Church in Queensland between 2008 and 2011—write this tribute to Rev Don Whebell who passed away on Friday 11 December 2020.

Following service in the RAAF,  Rev Don Whebell was ordained in Charleville in 1968 after training at Emmanuel Theological Hall including several Home Mission appointments.

Of these appointments, Cairns was particularly significant as there he met Pamela Bell, who later became his beloved wife. A richly rewarding life together saw Pam strongly involved supporting Don’s ministry, but also exercising her own especially in ecumenical affairs.

Early in the 1970s he became Director of Christian Education for the Presbyterian Church helping parishes across the state. During this period he helped form many young adult leaders through Youth Action Workshops and Camp Quest, an adventure camping programme. Long-term friendships resulted. Many of our church leaders attest to Don’s influence on their Christian formation.

Don was heavily involved in educating Presbyterian congregations about the vision of the Basis of Union of the Uniting Church. His passion for that vision continued until his death. In promoting that vision, December 2019 saw Don uploading his years of work to a website “Listening to the Basis of Union”.  He understood the unique role of the Uniting Church within God’s mission—that of being a unifying movement grounded in the person and work of Jesus Christ, living out Jesus prayer that we might “become completely one, so that the world may know that you have sent me and have loved them even as you have loved me” (John 17:23).

To this end, he participated in a wide range of ecumenical movements, locally and nationally. Even in retirement and through periods of ill health, he taught a course on the Basis of Union at Trinity Theological College grounding many future Uniting Church Ministers in this God-inspired vision.

In 1978 at St Stephen’s congregation in Toowoomba, he was also appointed Chairperson of The Downs Presbytery, a part time role.

Called to Central Queensland Presbytery in 1985 as full time Chairperson with the roles of pastor to the pastors, ecumenical relationships and oversight of  the mission of the presbytery, he served with great distinction for nine years.

Don was called by the Queensland Synod to be its Moderator twice, first as part time for 1989-90 and secondly as the first full time Moderator for three years, 1993 -96.  At the conclusion of  this  term, he was called as Presbytery Minister Mary Burnett Presbytery.

Through all these placements which required of him countless hours, even days of travel, Don faithfully proclaimed the gospel of Christ, and pastored all he met. He loved to drive, especially his beloved Citroens because it meant he could stop and chat with friends and colleagues on the way. There was never a rushed conversation with Don.

He is greatly loved across the church in Queensland and across the whole country. A grateful church gives thanks for the life and ministry of Don Graham Whebell.

To find out more about Don Whebell, read a brief history in his own words.

A service of thanksgiving to celebrate the life and ministry of the Don will be held at the Beenleigh Region Uniting Church on Friday 18 December at 2pm. With the current COVID restrictions, this service at the church is by invitation only. You are invited to participate in this celebration through this link.