Home > Queensland Synod News > Whose face is on your prayer wall? 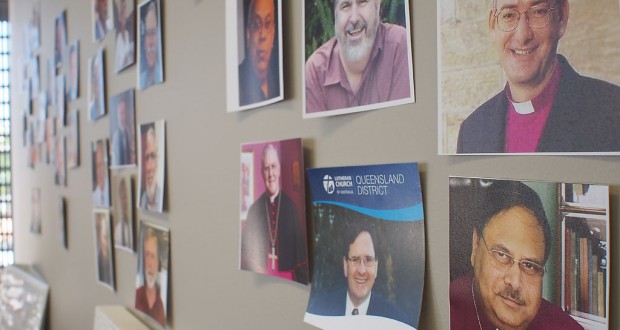 As part of the Queensland Synod’s commitment to being a prayerful listening church, a new program has been launched to encourage intercessory prayer among Christians. Rohan Salmond reports.

One of the first things you notice upon visiting the Queensland Synod moderator’s office are the dozens of photographs scattered on the wall. Religious and political leaders are depicted as reminders to pray, something Rev David Baker does every day.

“I set up the wall really because I’m not a very good prayer,” says David. “Being a visual person, having my eyes open helps me to pray, so I set up the prayer wall
and put some faces up there of people I believe I’m called to pray for in this role.

“Particularly one of the groups is other Christian leaders in the state. They’re the men and women that are on my heart as I’m called to pray and bear witness to the oneness of our life in Christ.”

Praying for one’s Christian counterparts is something David wants to see more of across the Queensland Synod. Together with the Synod Ecumenical Relationships Committee (SERC) he launched One in Christ, an organised system of ecumenical prayer in October last year.

Ecumenism is the beating heart of the Uniting Church. The Basis of Union articulates the Uniting Church’s desire to “give expression, however partially, to that unity in faith and mission” with other churches.

It continues, “It [the Uniting Church] believes that Christians in Australia are called to bear witness to a unity of faith and life in Christ which transcends cultural and economic, national and racial boundaries, and to this end the Uniting Church commits itself to seek special relationships with Churches in Asia and the Pacific.”

Trinity Wellington Point Uniting Church has prayed for local church leaders for a long time, and is one of the first congregations to commit to pray as part of the One in Christ program. Rev Linda Hamill explains that intercessory prayer has been an integral part of the congregation for years.

“There is a small group of people that meet every Monday night to pray. Some of these prayers are brought forward as intercessory prayers each Sunday.

“Our counterparts in other denominations know they are prayed for because we participate in a group called Pray Redlands City. One in Christ will be an extension to this.”

Congregations are encouraged to devote time during their Sunday services for intercessory prayer for other Christian leaders in their local area and create their own prayer walls in their local church. As the program continues to expand, it is hoped other denominations will reciprocate and join the covenant of intercession.

One in Christ resources can be found at ucaqld.com.au/oneinchrist