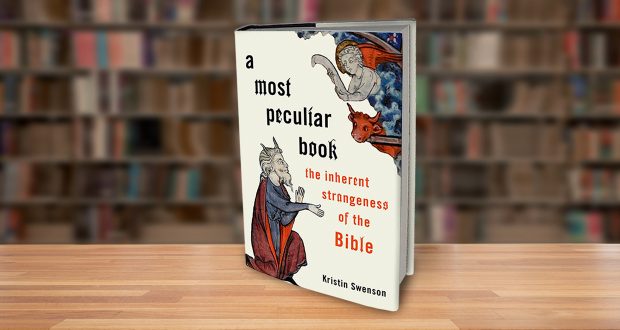 As a foundational element of the Christian faith, the Bible has been read by billions, informs the wider moral and social landscape of much of the world and has been the inspiration for many a good (and bad) deed throughout history. But Kristin Swenson’s latest book on the Book tackles the complex and surprising dimensions of the Bible and offers readers a way of understanding the Bible they may not have considered. Nick Mattiske reviews.

First of all, let’s reiterate that the Bible is not a book. It’s a library or a set of books with different authors. That means that there are variations in style, different emphases, different timelines, even contradictions. Yes, says Kristin Swenson in her breezy, even bubbly but informative book, contort all you like, but the contradictions are there.

Swenson’s book is not above-all an attempt to destabilise the Bible or Christian faith. It’s an attempt to take the Bible seriously, and that means understanding what it is. The Bible is a collection, but not like the chronological Harry Potter series. There are different Bibles, in terms of order of the books within, and what’s left out. This depends on theological emphases of the various churches, or other, historical factors. And then, of course, there is the matter of translation. Or translations, plural.

Swenson describes sitting next to a man on a plane who, when he found out Swenson was a biblical scholar, asked what King James “really meant”. While King James didn’t write the Bible, neither is there an “original” Bible. The Dead Sea Scrolls contain different versions of books. The Book of Genesis, for example, has two authorial styles, and two different accounts of creation, one after the other. The fact that they are both there says interesting things about the Bible’s compilation but also its capacity. Swenson describes the Bible as a conversation, between editors and authors, and, I suppose, readers. And she cautions about thinking of our own interpretation as the only legitimate one.

That is beside the fact that, through misremembering, mistranslation and faulty summarisation, much of what is popularly thought of as “in the Bible” is actually, Swenson says, “sort of to not really” there. In other words, it is easy to feel familiar with the Bible without actually reading it. In noting some of its “strangeness”, Swenson defamiliarises the Bible, making it more enticing, but also requiring more caution, humility and care in the reading.

Yet don’t go to it as a moral guidebook, she warns again. The Bible contains ethnic cleansing, slavery, cheating and polygamy, all seemingly sanctioned by God. Elisha sets wild bears onto children who tease him. And if you want to dismiss that by claiming that’s all Old Testament stuff, in the New Testament Jesus seems to have a particularly dismissive attitude to family and work. Less severely, the Bible doesn’t seem to have a problem with dancing and drinking either.

Jesus outrageously claims that the degenerate who repents will receive the same eventual reward as the morally upright person. In this he is prioritising God’s unconditional love over moral accounting, yet another and particularly compelling example of why the Bible is such a peculiar book.