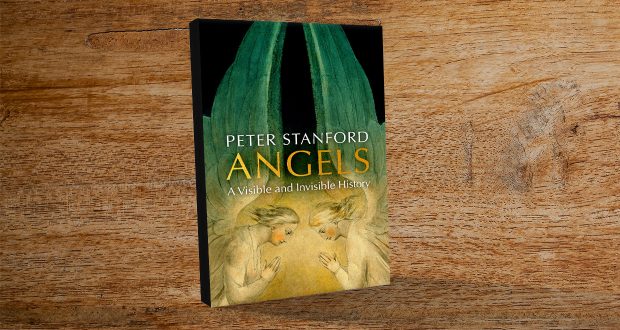 Angels are ingrained in western culture from the cherubic depictions seen in many classic paintings to the modern conception of protective guardians hovering around us that crop up in contemporary literature and movies. Nick Mattiske reviews Peter Stanford’s book on the topic, Angels: A Visible and Invisible History, and considers their origins in religion and their development over time.

French theologian Jacques Ellul once wrote, in typically contrarian fashion, that the Old Testament idea of angels is more message than messenger, and that speculating about what kind of individuals they are is a distraction from focusing on God’s word.

But of course, over the centuries there has been much speculation. Saint Augustine thought angels were beings of pure light. Thomas Aquinas thought they were made of condensed air. As is clear from this, it isn’t easy to describe something without physical existence.

Weirdly, among westerners, belief in angels surpasses belief in God. Peter Stanford, in his breezy cultural history of angels, suggests that there is a New Age influence at work here, and an attraction to something more personal than creeds and doctrines, as well as the fact that in a suppressive scientific age, angels are a way to talk about the spiritual. During hard times it is also comforting for some to believe they have a personal, spiritual guardian.

Indeed, the more recent idea of an angel is a guardian angel. Stanford mentions it only in passing, but in the 19th century there was a huge trade in paintings and prints of guardian angels watching over children on rickety bridges or cliff edges, the most famous, almost iconic, images being by Bernhard Plockhorst and Hans Zatzka. To our eyes these might seem sentimental and kitschy (which actually endears them to some collectors), but they express a commonly held belief about the role of angels. Yet this concept of a guardian angel is a tricky one. When children die, are their guardian angels incompetent and negligent? 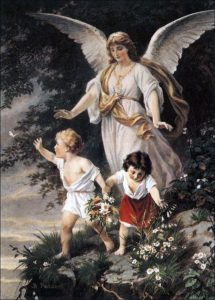 The earliest Christian art didn’t depict angels with wings. They were in appearance more seemingly human, like the visitors to Abraham (but subdued). These Genesis angels are far from the cherubim and seraphim of Isaiah, although the angels that bar re-entry into Eden are closer to Isaiah’s fiery creatures. In the Old Testament angels and God are often conflated, as in the story of Jacob wrestling with God/an angel, which brings us back to Ellul’s point. Karl Barth wrote that we can’t think of angels as independent individuals, as humans are. He rules out the concept of guardian angels. Saint Paul, too, thought angels a distraction from Jesus, who replaces angels as connections to God.

Over the centuries, though, “angelology” only got stronger, and, says Stanford, the concept of hosts of angels was so ingrained in a western spiritual worldview that their existence was simply not questioned. In the organisation of the cosmos (in Stanford’s image), God was the CEO and angels the middle-management, handling the details. The Jewish scholar Maimonides suggested that the “message” the angels carry can be thought of as force and movement originating from God. Angels were sorted into hierarchies, depending on their roles, as in a lovely illustration that originally accompanied Hildegard of Bingen’s writings, of concentric circles of cartoon-y angels surrounding a white void at the bull’s eye to symbolise God’s mystery.

Rather than merely guardians, monastery founder Saint Benedict thought that angels report back to God on our bad behaviour, which fits with the Islamic idea of the angelic as protection and surveillance. In the Middle Ages angels found competition from dead saints, though Saint Francis was an angel man, frequently seeing them and conversing with them, as painted by Giotto, whose angels in a chapel in Padua do anguished somersaults as they witness the crucifixion, at odds with the older image of angels as passionless, characterless creatures.

In the Renaissance, angels were given more character, and got mixed up with the cupids of Greek mythology to create the familiar, comic image of winged toddlers. Probably the most reproduced image of these putti is Raphael’s portraits of two bored-looking cherubs at the bottom of the Sistine Madonna painting seemingly leaning on the altar. These messy-haired scamps are far from Augustine’s beings of pure light. 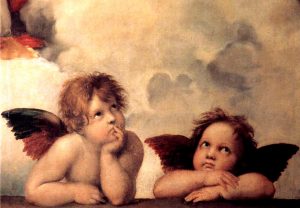 The contemporary proliferation of images of these cherubs suggests an emotional connection, a longing for something or someone to bridge the personal and divine, to connect God and human beings, close to us, sharing our fears but able to communicate with God. Stanford is sympathetic to such a longing, but, then again, as Saint Paul notes, we already have that figure in Jesus.