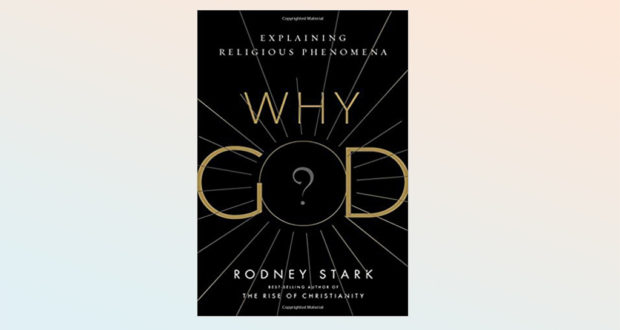 Religious faith draws in people from a wide array of cultural, economic and ethnic backgrounds but what makes humans attracted to religion in the first place, and why does religion feature heavily in human societies? Nick Mattiske reviews Rodney Stark’s latest book Why God? to look for the answers.

As religion supposedly declines in the West, those on the outside want to understand why belief persists.

Sociologist of religion Rodney Stark offers a sympathetic explanation of why people might come to believe in God that is refreshingly free of jargon and a corrective to more hostile accounts of belief, and which will still illuminate much for those of us within the walls of churches.

In summary, he argues that religions are not fundamentally irrational. As even Richard Dawkins notes, we wonder at why the world is as it is, and historically there has been a supernatural element to this. If we are convinced of the supernatural it then makes sense to interact with this other world, to gain favour in this world, as well as for a possible next world. We gain these rewards through worship and obedience.

Mediators (priests) are needed, and there is an inevitable ritualization and organisation. Pluralism of gods whittles down to monotheism, which provides the best metaphysical explanation and commands more loyalty, which in turn leads to moral control. In time, religions become more liberal and lax, initially to attract more members, but it is actually the stricter (to use Stark’s term) religions that are growing. Breakaways happen, religions are reinvigorated or new religions created.

There is a tendency to try and monopolise religion (as in the Middle Ages or Revolutionary France) but this is usually counterproductive. Counterintuitively, even for sociologists, our own pluralistic society might be healthy for getting bottoms on pews.

Much of this is sound reasoning, and is confirmed by a reading of the Bible. But no doubt some of this will be disputed, and Christians too might feel the need to debate Stark, at least in their heads, particularly when, despite his professed intentions, his personal “preferences” seep through.

One wonders too where Jesus fits into Stark’s theory. It is not quite true that, as is often suggested, Jesus was entirely dismissive of religion; it was rather that he criticised ossified religion. But he certainly seemed persistently unconcerned with what we might see as key facets of religion, such as societal standing, ritual and detailed explanations of why the world is as it is, suggesting that sometimes these just get in the way of compassion and selflessness.