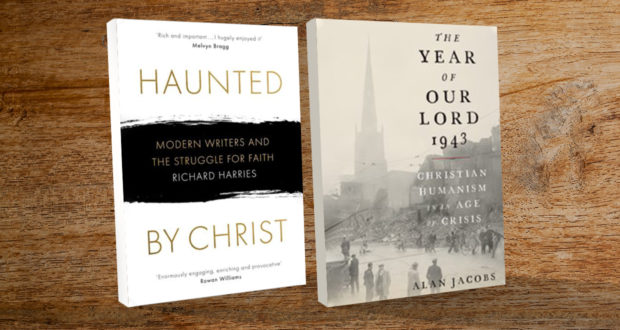 Nick Mattiske reviews two books (by Richard Harries and Alan Jacobs) featuring acclaimed writers W.H. Auden and T.S. Eliot, primarily for their work in thinking about the role of writers and artists in speaking into modernity about the deeper questions.

Harries writes from within Christianity, as it were, but the various writers he discusses in the chapters of Haunted by Christ inhabit the fringes of the faith, the ragged edges where the secular world gnaws away at old certainties but where the interesting stuff happens.

Jacobs, in his book focused on the years of WWII, takes a view from the centre of a war-ravaged society, where Christianity has been relegated to the fringes, blown there perhaps by the bombs. Writers such as Auden, Eliot, Simone Weil and C.S. Lewis engaged in what they saw as the urgent task of clawing back, asking where Christianity fitted into the new scheme of things, asking how artists promote a moral view without promoting theocracies (as religious complicity with political power was shown up by the flare of warfare), asking how the state can serve the people and not the other way around, asking how one can believe in absolutes without becoming fascist, asking, indeed, how retaining moral absolutes can combat fascism, as relativism has proven not up to the task. It was especially this last point that shocked the likes of Eliot and Auden back into religious belief.

Haunted by Christ takes its name from the novelist Flannery O’Connor, who described the American South as such, but the term could relate wider to the western literary worlds of the 19th and 20th centuries (and beyond). Harries’ book has short chapters on authors from Dostoyevsky to Marilynne Robinson, who lived before, during and after the world wars, but who all either wrote into a society haunted by Christ or were themselves haunted by a faith they doubted.

Harries, with a sort of typical English generosity, sees honest struggles of faith as a good thing, and argues that writers can positively illuminate faith for all of us in a different way than theorists and theologians. (In Australia, novelist Tim Winton provides evidence of that.) One of the writers Harries profiles, Emily Dickinson, was repelled by the banalities of preachers but Harries points out that this doesn’t rule out a personal faith, and he thinks her writing is a form of ministry, a working out of grace not restricted to middle class church-going.

The Year of our Lord 1943 focuses more narrowly on the years of WWII and talk of what would happen after the war. In particular, the writers Jacobs discusses—Eliot et al—were preoccupied with the role of Christianity in moral education, against the idea that a purely scientific (and non-religious) approach to education would instil the moral values necessary to prevent more war.

For these thinkers, it was not a matter of prioritising the spiritual over the material. Rather, for someone like Lewis, the idealisation involved in the nationalistic ideologies of the time, as well as devaluing the individual, often went against embodied, individual experience (for Auden, this can be seen in the conflict between art and rationality). The kind of grand hubristic schemes that had brought the world to war could not provide a basis for the post-war world and the flourishing of individuals. And yet, as Jacobs notes, the anti-human power of nationalisms, ideologies and technologies did not ebb after the wars, but continue to be a problem in our own day.

These Christian humanists, as Jacobs labels them, did not always agree. Jacques Maritain lamented the lost hegemony of Christianity whereas Simone Weil took the extreme view that any sort of religious pressure was akin to fascism (a reason why she refused to be baptised). And they were not without their problems. Eliot was something of an elitist when it came to education (though he was not the arch-conservative he is often portrayed as), Auden made too much emphasis on the everyday, and Lewis idealised the medieval world. But they each saw the problems of a “modern”, technological approach applied to everything, an insight that, Jacobs notes, brings them in line with the French writer Jacques Ellul, who prophetically warned against the totalitarian nature of technology (or technique, which, as is often pointed out, is closer to what Ellul was thinking of). Ellul’s warnings only seem to grow in relevance, as in our society there is a prevalent view that technology (and the mindset that comes with it) will somehow relieve us from societal conflict and fix environmental problems, without us needing to attend to the moral basis of our behaviours.