Home > Scoop > Book review: How to Read the Bible and Still be a Christian 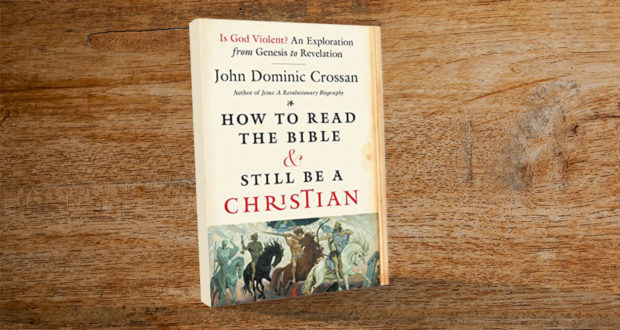 Book review: How to Read the Bible and Still be a Christian

Does the Bible offer us a singular vision of God and Jesus or is the text a far more complex beast of contrasting authorial visions and motivations? Rodney Eivers reviews John Dominic Crossan’s book How to Read the Bible and Still be a Christian to explore how we read the Good Book and what we should take from it.

The Bible teaches us how to be kind and loving people. Right? Those of us brought up from childhood as churchgoers and people of Christian faith, take this for granted. Millions upon millions of Bibles are given away or sold at concession prices every year by such institutions as the Bible Society and Gideons.

The assumption is that if only people would read the Bible they will become good people by following the examples set by the stories within.

But is this necessarily so? John Dominic Crossan suggests that we read the Bible in “full”. If we do this we find that the scriptures send very mixed messages indeed. This applies right from Genesis to Revelation. What would a perceptive reader coming in objectively to read the Bible without a background of religious faith find?

In taking the writing at face value she would find that the non-violence proclaimed initially as the characteristic of God and Jesus initially, falls away in due course to recourse to power and aggression.

Crossan sees this pattern occurring from the stories Garden of Eden, through the period of the kings and prophets to the gospels and on to the writings attributed to Paul.

He explains this duality through the changing context (his preferred term for this is “matrix”) of the times at which the various books of the Bible came to be written. Through my 70 years or so of Bible study I was aware of this and allow for it but John Crossan brings new insights and new clarity. His recognised reputation as arguably the most acclaimed biblical scholar of this generation comes through in his historical referencing. The bonus is that in this instance, at least, his writing is very readable.

Crossan’s description and analysis of the setting of the Jesus story and the writings of Paul in that first turbulent century of the Common Era would be a clear as any I have studied. It matches well other insights I have had recently into the links between the developing Christian theology of that period, Greek philosophical thought and the divine political status of the Roman emperor.

The author, however, makes this plea.

“Justice is the body of love and love is the soul of justice … We have separated what cannot be separated if each term is to retain its full power.  Justice without love may end in brutality, but love without justice must end in banality. Love empowers justice and justice embodies love. Keep both or get neither.”

So let us read the Bible in full. But let us indeed be selective in what we take from it, in observing that swing between goodwill and violence to be found there may we extract, from the context, the message of justice with love.

The responsibility to do so lies within our personal faith convictions as well as with the decision-making councils of our Uniting Church.

A couple of footnotes:

Rodney Eivers is the co-founder of the UC Forum and Milpara.

How To Read The Bible & Still Be A Christian
Author: John Dominic Crossan
Publisher: HarperCollins
2015
To purchase visit Amazon Australia