Home > Scoop > Book review: Not for the Faint-Hearted 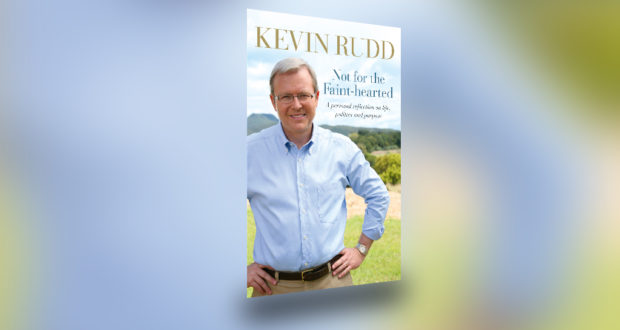 For many Australians former Prime Minister Kevin Rudd was a love-him-or-loathe-him figure and his career as leader of the Labor Party was anything but smooth sailing with infighting and leadership challenges eventually engulfing the later years of his parliamentary career. Nick Mattiske reviews his autobiography.

You’d be forgiven for thinking that the title, Not for the Faint-Hearted, refers to attempting to read Kevin Rudd’s memoir, which runs to 600 dense pages (and this is only volume one).

It actually refers to the business of politics, and Rudd introduces the book by not only suggesting that it takes courage; he also encourages people to get into political life in order to make a difference.

Politics may take courage, but it also involves vanity, charm, ruthlessness, a sense of humour, a thick skin, high ideals and low tactics. All of these are on display here. The media tends to portray politicians as one-dimensional. Rudd’s memoir is an argument for politicians—or at least some, including this one—as complex human beings.

What makes the book is that Rudd clearly enjoyed revealing himself (at length). And here are all the things Australians have loved and hated about Rudd—his ego, his frankness, his long-windedness, his cringe-worthy ockerisms, his cringe-worthy sentiment, his intellect, his self-deprecating humour. Some journalists have labelled Rudd a Jekyll and Hyde character, but like most of us, he is simply multi-dimensional—acting differently in different situations, containing good and bad, saint and sinner.

Although he argues for the worth of political life, his career makes you wonder at times why he persevered (though he boasts of being tenacious). In politics he was something of an outsider, on many fronts—a Queenslander, a progressive of the centre, not a player in the Labor factions, a self-described nerd, a former career diplomat and public servant rather than a career politician. And a Christian in a party that often sees Christians as conservatives and sometime hypocrites.

His faith is of particular interest. Catholic as a child, he is dismayed at the brutality of his Catholic education. In the fervour of youth he saw himself as a Marxist and atheist. While at university he flirted with evangelical certainty and stumbled into a Chinese church, which stimulated his faith and his love of Chinese language and culture.

In the book he quickly establishes, articulately and passionately, the grounds for his faith, with an eye on the compatibility of faith and intellect, as well as, for him, the compatibility of Christianity and progressive politics, which, at its best, seeks to make change rather keep the status quo, in order to realise what Australians have termed “the fair go”.