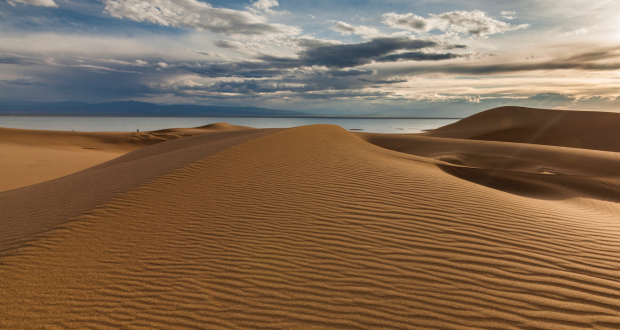 The desert is frequently featured in our art and popular culture (usually) as a distant and unforgiving place, but it is also a major component of earth’s geographic character and affects around a sixth of the population. Nick Mattiske reviews William Atkins’ recent book The Immeasurable World which journeys into desert life.

Oceans cover a lot of the earth’s surface, so ours is a watery planet, but deserts account for almost 30 per cent of land, depending on your definition of desert (many of Australia’s so called deserts were only deserts to European explorers, not traditional owners).

Desertification affects a sixth of the population, William Atkins tells us in The Immeasurable World. Some of this is human-induced—ironically, from the over-use of water, which is often diverted from arid landscapes, turning them into pure desert (which then often begins to encroach on formerly non-desert land). The desert is a hard beast to tame.

Atkins has moved from the topic of moors (in his previous book) to deserts, which seems like a logical progression, but he also participates in something of a British obsession with deserts, from the likes of Lawrence of Arabia, but including many more, who wanted to write about and conquer deserts, perhaps because the harshest deserts are so distinct from England’s green pleasantness.

As well as lacking water, deserts are visually bereft, though they may have a stark beauty (I mean in an extreme desert of sand dunes, such as in Saudi Arabia). Mildred Cable, a British missionary and author of The Gobi Desert, thought dying from boredom was one of the most extreme travails she faced. Atkins, who can’t get used to the monotony, keeps looking out the train window in case he misses something. But there is only so much to see, and only so much time before the gaze turns inwards. He comments on how the lack of obvious landmarks distorts distances, as with the ocean, with which deserts are often compared—they have “shores” and ever-shifting surfaces moved by the wind.

The monotonous landscape throws people into starker relief. For a topic thought of as hostile to humans, Atkins’ book is full of people, personalities—explorers, adventurers, entrepreneurs, guides, missionaries, monks. The desert has a pull especially for those with extreme religious sensibilities, though Atkins notes how in medieval, northern European paintings of Saint Anthony, who spent time in the Egyptian desert, the backgrounds are quite un-desert-like, because northern Europeans at that time had little concept of the bleakness of true desert.

The attraction of the desert is that it offers few distractions from the contemplation of the spiritual, yet the temptations are still there, though in the head, and magnified in the barren setting. The desert is the “devil’s domain”, where Jesus was tempted, where the outcasts are banished to. Atkins himself makes some concessions to the ascetic, in the preparations for his extended desert perambulations, keeping only a bed and a few desert-themed books in his apartment.

In Arizona, Atkins meets an activist, priest John Fife, whose Christianity is put to a different use than isolated contemplation, who deals with what Atkins calls the literally intolerable American policy on Mexican refugees, many of whom are fleeing the horrors related to drug gangs. Fife says that US law is both immoral and illegal, so he is obliged to break the law, helping refugees survive perilous desert crossings, against border police who destroy water and food supplies to “discourage” those making the treks but which results, inevitably, in deaths.

Atkins also meets Coptic monks in Egypt, and rather than see them as oddball throwbacks, he understands their desire for solitude in order to focus on the world, rather than escape from it, a chance to get to the essences rather than be distracted by superficialities.

In contrast perhaps, he goes to the Burning Man music festival in Nevada, which until the pandemic attracted 70 000 to this temporary city on the salt pans. Initially he is enthusiastic. There is virtually no crime except for the presence of illegal drugs. Participants are seeking something more raw, even spiritual, as with many entering the desert. But after gawping at it all, Atkins is increasingly wearied by the partying and overstimulation, and longs for the chance to quietly read a book. And he realises that it is an event for cashed-up white people who hardly notice the Mexican immigrants in their midst employed to do the cleaning up.