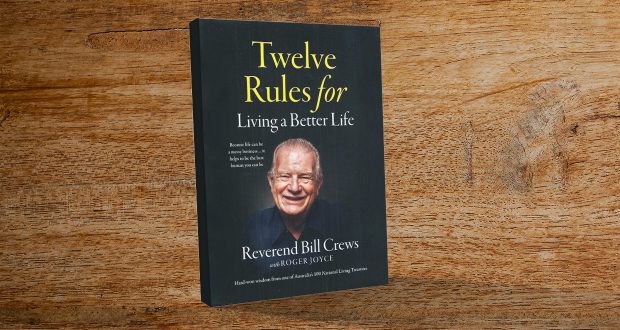 Whether he has been working to feed the poor, teach the underprivileged to read or assist those struggling with drug rehabilitation, pioneering social work has been at the forefront of Rev Bill Crews’ life. Now the prominent Uniting Church minister (and once labelled one of Australia’s 100 most influential people) has released a guide for better living for the secular and spiritual alike. Rodney Eivers reviews.

What a man, what a life, and what an inspiration for living the Jesus Way at the “grass roots”!

I had hardly heard of the Rev Bill Crews until a few years ago. No more than two or three times when he turned up on television or the wireless as promoting some charitable event such as his annual Christmas meal in inner Sydney. I got the impression that he may have had something to do with Uniting Church minister Ted Noffs who founded and was associated with the Wayside Chapel in Kings Cross.

Ted Noffs was one on my pin up boys in the early days of the Uniting Church. One of my most memorable reading discoveries being his book By What Authority?, published in 1979.  It turns out that Bill Crews was very much a long-serving protégé of Ted Noffs at the Wayside Chapel. On departing from that association he studied for the ministry and was appointed to Ashfield Uniting Church where I gather, he is still the minister.

These days, in reading of any Christian religious leader I am always curious about her or his religious orientation. That is, in that fundamental divide between orthodox and progressive Christianity. Ted Noffs would have been a “progressive” leader in his day although that term was not in common usage at that time. I gather he was put on trial by the Methodist Church for heresy. Bill Crews seems to have followed in Noffs’ footsteps. Academically, it would, however, have been to a lesser degree. Crews himself describes Noffs as the thinker and himself as the doer.

Nevertheless, the supernatural, to a varying degree a mark of traditional Christian orthodoxy,  plays no significant part in Crews’ practice of Christian faith. In one chapter where he ponders on some of the remarkably favourable coincidences which have come his way, he dabs a toe into the possibility of an “outside” force guiding certain events. He does not dwell on this, however. No, his faith is expressed in what Jesus seemed to urge. If we want the world to be a better place it is up to us humans to do something about it, not wait for God to do it.

God does not get much of a mention but quotations of what Jesus is claimed to have said are scattered through many of the chapters of the book. Bill Crews has an interesting description of what might be the God-drive in his life. He calls it “The Voice”. Although not naming it in the same way I find myself identifying with a concept such as he describes. Beyond early childhood, (and perhaps not even then) a theistic God—someone “out there” in control of the world and available to be called upon if we provide the right formula—has not been a realistic concept. Even Tillich’s “ground of being” or panentheism (God in everything) has failed to grip me.

And yet, right since early childhood something has driven me to seek to make the world a better place. Through an association with the Christian church this has come to be linked with the example and wisdom of Jesus of Nazareth. It is something that, like Bill Crews’s “Voice”, survives in me despite any eventualities that might threaten to subdue it. In my case, in spite of a restless desire to change the world, and although I have come up with new ideas from time-to-time over the years, I have never had the charisma, leadership or persistence, compared with Crews to put anything notable into practice.

The appeal of Bill Crews’ story is not that he displays an aura of perfection. On the contrary, the impact of the book comes from the raw honesty with which he describes his own failings, especially in his intimate personal relationships. I am sure that many ministers and other church leaders will identify with the tension which arises between “marriage and family responsibilities” and “doing the Lord’s work”. Crews acknowledges that this “blindness” contributed to the breakup of his two marriages and a long-lasting alienation from other close relatives. We see a comparable stress indicated by the gospel writers in their depiction of the family relationships of Jesus.

It may also be said, reading between the lines, that in person, Bill Crews may not have been an easy person to get along with. As they say, history is written by the winners. Some of those who hindered him in one or other of his projects could have had good reason to do so. If I had known him face-to-face we may well have had differences of thinking and practice to work our way through. Indeed, Crews acknowledges that for all the support and admiration he had for Ted Noffs, the two of them did not always see eye-to-eye.

Having pointed to these few caveats, however, I have to express, admiration and commendation for the example Bill Crews has set. He has demonstrated in a very practicable and achievable way how the church in this 21st century can, at the most fundamental level, identify with the poor and needy in this world. Venturing out in this way at personal risk can at least move us in the direction of establishing and nurturing that Kingdom of God which Jesus defined.

I would like to see every person training for leadership in our Uniting Church or any other churches for that matter, well acquainted with this story.

A niggly point about the presentation of the book and its title: a name like Twelve Rules for Living a Better Life does not tell you much. It could have been the title of dozens of books on pop psychology over the years. In my reading, the 12 rules tend to be incidental and not concise enough to be imprinted in one’s memory. What gives them their power is that they come from the experience of Bill, himself. It is his views, his experiences, his practices which lead to the rules. I would have preferred to see the title of the book simply Bill Crews: His Story”, or something like that, highlighting him as a person. Twelve Rules could then perhaps be added as a sub-title. I would also have preferred to see a tone, lighter than the black background for the cover. The chosen depiction, however, may reflect Crews’ decision, in his later years, to wear black.

Rodney Eivers, a member of Acacia Ridge Uniting Church, is the sponsor of the UC Forum and Trinity College Queensland scholarships.