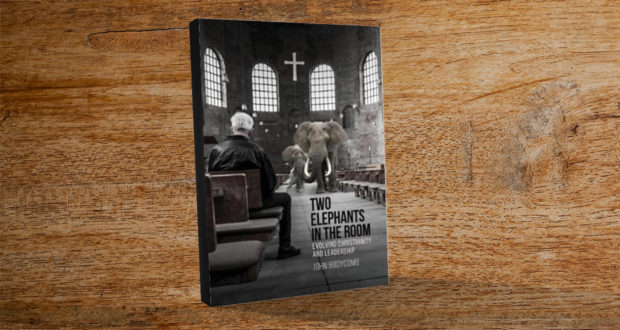 As mainline Christianity declines in Australia what does the future hold for Christians in this nation and more broadly in western societies? Rodney Eivers reviews John Bodycomb’s latest and last book Two Elephants in the Room and ponders the way forward for Christians and especially, the Uniting Church.

Written and published by John Bodycomb in the years leading up to his death at the age of 87 in 2018, this is a book which should be required reading by all those who have the future of the mainline, western religions—especially Christianity and especially the Uniting Church in Australia—at heart. For those of us in that category it might be a valuable resource supplementing Keith Suters’ The Future of the Uniting Church in Australia.

Reviews of the book will be found in other locations (a comprehensive one is given by Paul Inglis on the UC Forum website) and I do not set out here to provide another comprehensive summary of what Bodycomb has written. I do offer, though, a few personal reflections.

Bodycomb’s argument is one with which I have no great quarrel. In some ways his experience matches that of those of many of us who have participated fully over the past century in the religious culture of the Methodist, Presbyterian and Congregational (Bodycomb’s) denominations leading up to and through the Uniting Church in Australia.

Apart from recollections from his own long-ranging experience as a “professional” for some 61 years (much of this is related in his earlier book No Fixed Address) most of what John Bodycomb has to say would not be new to objective enquirers. Perhaps with the recognition that this would be his “last” book, he has written with a style and intention which is punchier, one might say more hard hitting, than that of other observers.

With his background in theological training and social demography, the author admits to be prone to making predictions. He claims to get it mostly right. There was one forecast, though, that he is embarrassed to say he got wrong.

This was that, buoyed by the success of the Billy Graham crusades and a boost to his own congregation in 1958, he claimed that God was sending a revival. It turned out, however, that since then support for organised religion has collapsed.

The western churches are in a bad way. Some might say that George Pell’s current engagement with the secular courts has put another firm nail in the coffin. Bodycomb sees the mainstream churches “in the forms that we have known Anglican, Catholic and Protestant will in Australia (probably in most western societies) be history inside the next 25 to 30 years. In the case of the Uniting Church, largely because of its demographic profile, this could be more like 15 to 20 years”.

So what are the two elephants?

One is the tremendous changes in western society and attitudes to organised religion in the past few generations. It has been change, change, change despite our not recognising this in many of our church doctrines and practices. The second is the rate of burn out of personnel and the failure to recruit new cohorts of “religious professionals”—ministers, priests and pastors.

Much has been written elsewhere about the first “beast”. Regarding the second, some of his figures are startling. We only have anecdotal evidence for the comparable Australian situation. An American study by Tanner et al, however, found that “forced” exit from the ministry appeared to be around 25 per cent in a number of denominations. Surprisingly, given their apparent vitality, it was highest for the Assembly of God (in Australia, now the Australian Christian Church) at the figure of 41 per cent.

Both I and John Bodycomb, along with perhaps most readers of this “review” will have experienced a childhood upbringing centring around a mainline Protestant church and in our case, in due course, the Uniting Church. Bodycomb, however, from his 61 years of varied experience as a religious professional is far more qualified and experienced than I to comment on the issues raised in this book.

We do share a couple of things, though. Although both of us, now in our eighties, would have held, and continue to hold, a committed “faith” conviction since our earliest days from Sunday School onwards, we also make use of more objective criteria. One of these would be in using a sociological perspective on the whole issue of religion. A second would be in the value we find in Abraham Maslow’s hierarchy of needs in prioritising what human beings seek in life including their religious orientations.

All this may seem a little doleful. It is true that Bodycomb hesitates when he poses the questions. Would I have chosen to become a religious professional if I had been aware, when I started, of where the churches were headed? Would I want to become a minister today? He is somewhat equivocal and sees few signs that a turn around can be achieved. He sees the Pentecostals and Evangelicals (he has coined the term Pentogelicals) as still being around at mid-century and notes the growing conservative influence of the Culturally and Linguistically Diverse (CALD) groups especially in the Uniting Church. Progressive Christianity (the Jesus way without the supernatural) as an adaptive response has some promise but Bodycomb sees it as being too cerebral to make much impact.

This indeed will be John Bodycomb’s last book. What he writes is pertinent to our current outlook and I would urge thinking readers and viewers to have a look at what he has to say.