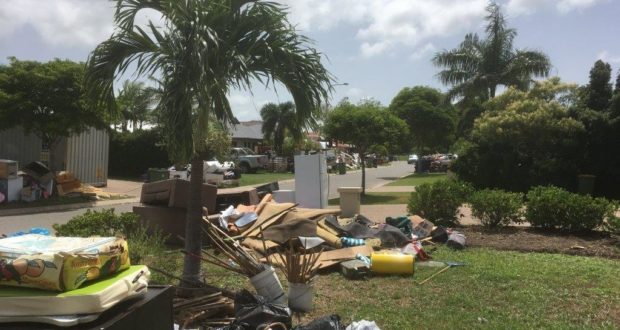 A street in Townsville after the flood. Photo: Supplied

Rev Anne Harley and Rev Bruce Cornish report on unfolding events in Townsville following the devastating floods at the end of January and early February.

On Sunday 27 January it started to rain. A typical summer monsoon bringing much needed rain to the city. Twelve months ago the dam was 14 per cent and the council was pumping water from the Burdekin at a cost of $150 000 a day.

It continued to rain and by Wednesday the dam was at 100 per cent. Bluewater Creek had flooded, wiping out houses and property. On Friday all schools were closed. The dam reached 200 per cent.

On Sunday most churches were closed as people stayed off the flooded roads. Evacuation texts came through encouraging people to get out and move to higher ground as the Ross River Dam floodgates were going to be fully opened.

Monday we woke to the devastation that had occurred. Hundreds of homes and businesses had been flooded. Thousands of people had been evacuated by police, SES and the Army. Townsville was declared a catastrophic situation.

On Friday 8 February the rain stopped. Many areas of Townsville had had over 1500ml of rain.

It was time for the church to shine and God to reveal himself.

Amazing stories of care and love flooded radio, television, social media and newspapers. People caring for people, random acts of kindness, heroic stories, incredible generosity and at that stage, not a life lost.

The church leaders of the city were called together and began to strategise how to meet the needs before us. Each church began to take on a different role.

Some are mentioned below but there are many others providing support.

Rev Bruce Cornish (Townsville City Central Mission) was invited by the council to be liaison person on behalf of the Combined Churches of Townsville on the Human and Social Recovery Group of the local disaster management committee.

Northreach Baptist Church established a Facebook page and mobilised their young adults in the clean-up. They also took on a role coordinating accommodation for those who had nowhere to live.

The Salvation Army provided food at evacuation centres and other support.

Calvary Church provided hot meals for people with no power and no homes.

The Samaritan’s Purse came into the city and provided training and set up teams with local church folk to help in the clean-up.

The church university residential colleges offered accommodation and meals to the SES crews who came to town.

YWAM with the Combined Churches of Townsville, council, SES and other Christian organisations established Team Townsville—Whatever it takes. This is a program to visit every affected house in every affected suburb and ask, “How are you going?”, and to then direct appropriate resources as required.

Please pray for those: