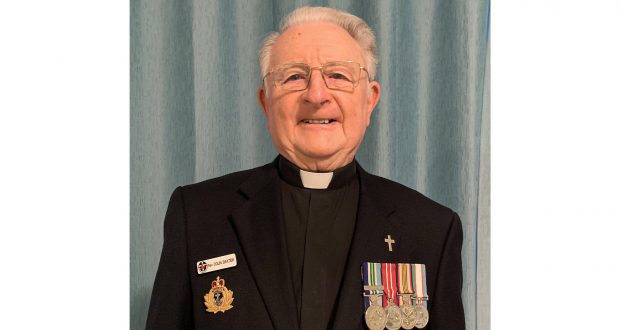 James O’Callaghan meets Rev Colin Baxter of Bribie Island who received an Order of Australia Medal (OAM) for his service to the Uniting Church and the community, particularly as Naval Chaplain to returned veterans.

Rev Colin Baxter’s OAM citation creates the picture of a man who has accomplished many things in his life.

From being deployed to Japan immediately after the second world war, working in Newcastle coal mines, bush ministry, establishing churches in what is now one of the most thriving communities in our nation’s capital and helping bring Christianity to mainstream media, Colin has many stories to tell.

Growing up in the coal mining region of New South Wales, Colin said there were many points in his life during which time he discovered his faith.

His journey from faith to ordained ministry began when he first met the lady who would become his wife of almost 70 years, Beth, the daughter of a Methodist minister.

When speaking to Colin, one cannot help but be moved by the devoted love he holds for Beth, who passed away three years ago.

“Before we moved to Queensland, she made me promise to build her the house of her dreams one day,” says Colin.

“It took me 50 years, but I did that. I wish she was here to enjoy this award with me as much that I have accomplished would not have been possible without her.”

Early in their courtship, Colin enlisted for operational service in the Navy with the occupation forces in Japan to travel to Victoria for training ahead of his deployment when he made his first commitment to God.

Beth encouraged him to endeavour to attend church with her as that would please her: “I said, ‘Well, that’s a deal. I’m happy to do that,’ which became a turning point in my journey.”

He was committed to naval training in Victoria for six months in preparation for a deployment overseas and kept his promise to the church in training by becoming an assistant to the naval chaplain at the base.

Upon returning from deployment, Colin sat the lay preacher’s exam as a preparation of candidature to ministry after his time overseas, where he found a distinct call to ministry. But Colin struggled to adjust to the life of a student and decided to discern his position by retiring from study and return to his job in the coal mines.

Another key moment in Colin’s life was during a service in Japan when a high ranking official in the British military came to Colin and told him that he was in the wrong army, referencing the ministry.

After enduring a tragic workplace accident, Colin attended an event at the Methodist central mission in Newcastle. He had been encouraged by a number of ministers who indicated that he had much to give to the church and was told by the then minister of Albert Street Church, the Rev H.M. Wheller, that if he and his wife ever wanted to come to Queensland, there would be a place for him.

A short time later, Colin and Beth arrived in Harrisville, outside Ipswich, where he did nothing but bury cows for much of the 1951 drought.

“I couldn’t get a stipend, so we picked onions and potatoes for money,” says Colin. “It was a hard introduction, but I wouldn’t change it for the world.”

From Harrisville, Colin was posted to Caboolture where he and Beth supervised the first of the four new churches and one church hall in two states.

After Caboolture, Colin moved to western Queensland with postings in Chinchilla and Kingaroy: “Kingaroy was a great posting, it was the right time,” says Colin. “It was here that I was introduced to the media with a radio program which was to influence my future eighteen years in the media.”

This love of the media would see Colin become the Queensland Producer and Director of the Christian Television Association Australia, where he was in charge of producing 100 hours of programming every year. To better equip Colin with this responsibility, he secured a mature age Arts Divinity Degree with the University of Queensland.

From Kingaroy he went to Canberra to what was then called the Woden Valley. A minister from each state was sent there in the 1960s and Colin’s responsibility was to supervise the building of the Yarralumla church complex in three years.

“I firmly believe that this posting was a big contributing factor in me receiving the OAM award,” says Colin. “It gave me experience that no one else could give me. The church allowed me to work beyond community boundaries, primarily with veteran communities. I have to give the church credit for allowing me to move outside of the parish boundary and serve my God, my parish, my community and my country. I feel extremely privileged.”

During his time in Canberra, Colin was commissioned Officer Chaplain of the Royal Australian Navy Reserves, a role he held from 1965 to 1990 and in retirement has provided pastoral care to ex-servicemen and women veterans.

When asked what the church has meant to Colin, he says it has provided him with an avenue to express himself: “I was never a good student at school, I was ambidextrous but enjoyed music and performing.”

After 47 years of service as a Methodist and then Uniting Church Minister in both New South Wales, Queensland and the ACT, Colin retired in 1995. Colin’s ministry to chaplaincy includes ex-service organisations based in Bribie Island, including the RSL and Vietnam Veterans Association of Australia.