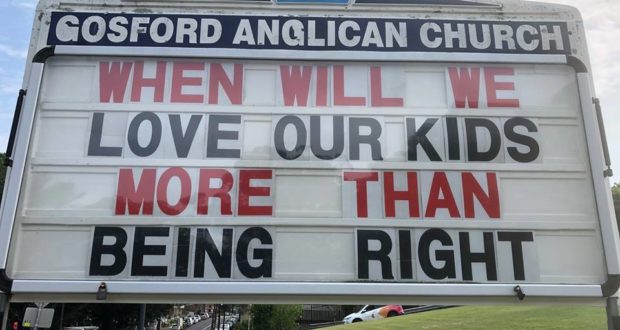 The Queensland Times has news of the latest controversial sign outside the Gosford Anglican Church causing a stir in light of the national debate around pill testing at music festivals. Reading “When will we love our kids more than being right”, the sign is the latest message from Father Rod Bower who has previously made headlines for signs commenting on Australia’s refugee policy, same-gender marriage, gun control and rape culture.

Bower conducted the funeral service for Alex Ross-King who died from a drug overdose in mid-January at the FOMO Music Festival.

Some people were less impressed with Bower’s message with some online commenting, “I find the inference that parents who are opposed to pill testing love their children less abhorrent,”, “You are misinformed and flat out wrong,” and “Keep religion out of politics … no good comes from it.”

Vision Christian Radio reports on Franklin Graham (Billy Graham’s eldest son) and his imminent tour of Australia in February, asking whether Australia is still open to a revival? Arguing that there has been a steady “moral decline” in Australia due to changing laws and views on “abortion, euthanasia and same-sex marriage”, is the Gospel “exactly what Australia needs to hear right now”?

“We’ve had a tremendous response and we’ve trained 10 000 Australian Christian counsellors from churches that have been through our Christian witness classes,” says Graham on his forthcoming crusade. “We have to have the Australian churches involved because when we leave the country, the people who put their faith and trust in Jesus Christ are going to be going into the Australian church.”

In 1959 Billy Graham toured Australia for four months reaching more than three million people, which was roughly a third of the nation’s population; in today’s terms that would equate to around eight million people.

ISIS in the Philippines: Divide and conquer

Christianity Today explores the reasons behind terrorist attacks on Christians in the Philippines and suggests that it is part of an ISIS campaign to enflame tensions in the region. The Filipino city of Jolo suffered a bomb attack on a Catholic church which killed 20 people including churchgoers and soldiers. The attack came in the wake of a key referendum that offered the area greater autonomy.

General Secretary of the World Evangelical Alliance Efraim Tendero commented on the terrorists, “What they want to do is pit Muslims and Christians against each other. You can see that the moderate Muslim community is peace-loving and would like to support peace.”

CBN News reports on the latest twist in the case of Asia Bibi who sat on death row for close to a decade on blasphemy charges in Pakistan. Bibi—who is a Christian—was recently acquitted of the charges and subsequently released but Pakistan’s Supreme Court will now re-examine its decision to free her following protests and a petition from Islamic extremists.

Bibi is now in hiding since her release fearful of radical Muslims killing her but her lawyer is confident the Supreme Court will not re-imprison her.

“They have filed the petition on flimsy grounds,” said lawyer Saiful Malook. “They haven’t attempted to counter her release on constitutional grounds. God willing, she will have the decision in her favour tomorrow.”

Bibi’s case has made international headlines with many calling for western countries to grant her asylum. One place unlikely to be a safe haven for Bibi is the United Kingdom with reports that Prime Minister Theresa May allegedly blocked her from asylum for fear it would inflame tensions among British Muslims and could even lead to terrorist attacks against UK embassies.