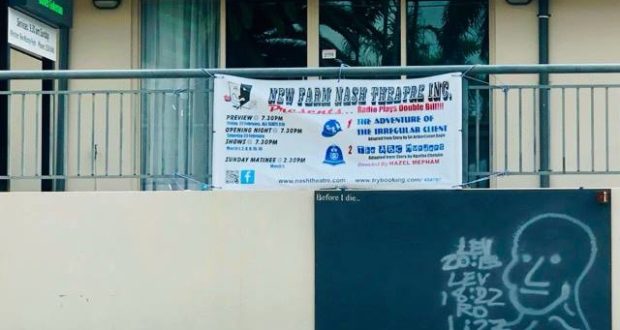 Daily Mail Australia reports on vandalism at a Brisbane church and their pop-music inspired comeback to the hate. The Metropolitan Community Church Brisbane in New Farm was the victim of a spray paint attack with hate symbols and Bible verse numbers painted over their signage. Given that the first spray paint attack was a swastika drawn over a LGBT flag and the second depicted Bible verses which concerned sexuality, it is thought that the attackers were motivated by the church’s positive stance on LGBT matters.

The church however were not going to let the attack get to them too much after they released a statement on Facebook inspired by Taylor Swift: “As the great prophet Taylor Swift says, ‘Haters gonna hate, hate, hate, but we are going to shake it off!’” They also had a message for the person responsible: “Pray for the person who did this that love would win in their life instead of hate.”

Queensland Police are investigating the incident and have called on anyone with information to assist them.

Pell’s appeal to decide if OA is denied

The Guardian covers news of Cardinal George Pell and the potential for his Order of Australia honour to be removed should his appeal against child sexual assault charges fail. The newspaper claims that Scott Morrison will move to revoke the cardinal of his honour by writing to the Council of the Order of Australia and recommending revocation.

Earlier this week a suppression order was lifted and information was revealed that Pell was convicted in December last year of one count of sexual penetration and four counts of indecent assault against two 13-year-old choirboys.

Entertainer Rolf Harris was stripped of a similar honour after he was convicted of child abuse in 2015 and a petition to strip Pell of the honour got over 35000 signatures within a day of its creation.

Pell received a companion of the Order of Australia in 2005 for “service to the Catholic church in Australia and internationally, to raising debate on matters of an ethical and spiritual nature, to education and to social justice”.

Shocking arrest but was he preacher or “pest”?

CBN News reports on a street preacher in London whose arrest for “breaching the pace” sparked online outrage. A video of the incident was posted to Twitter which depicts an African man heralding the Gospel being stopped and questioned by police. The preacher and the policeman exchange words with the officer threatening to arrest the preacher for breach of peace if he doesn’t stop; the preacher responds by stating, “I will not go away because I need to tell them the truth—because Jesus is the only way, the truth and the life.”

The officer later handcuffs the man while another officer takes his Bible away despite the preacher’s protests. Rather bafflingly, one of the officers claims the preacher was being “racist” during the altercation.

Anglican clergyman and former chaplain to the Queen Rev Dr Gavin Ashenden was quick to condemn the incident, writing on Twitter, “The police have closed down freedom of speech and become Christianophobic. If we fail to protest we will lose our freedom under the law.”

The Christian Post has news of the first annual Christian witches convention in Salem, Massachusetts and looks at claims of “Christian magic”. Christian witch Rev Valerie Love who is the brains behind the event has also launched the Covenant of Christian Witches Mystery School to assist Christians tap into magic.

One of the event’s guest speakers will be Prophet Calvin Witcher who claims the Bible is a “huge book of sorcery” and that Jesus was a magician.

“You’re talking about the whole of Jesus’ adult ministry is all magic, all sorcery,” said Witcher. “Even if we just say ‘Jesus’. Every particular miracle Jesus does defies human law, defies the laws of the universe and the world. So … you can’t really talk abut being a Jesus follower without doing what he did which is magic.”