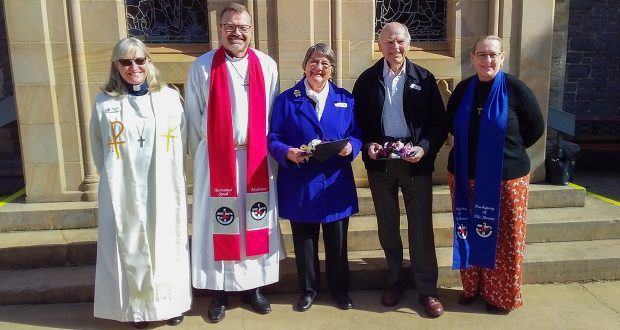 James O’Callaghan meets Bruce and Sue Tyson, both recipients of a Moderator’s Medal in 2020 which was presented in 2021.

For Sue and Bruce Tyson of Toowoomba, the church has provided them with an outlet to meet people and help those in need.

While both were baptised and confirmed—Bruce an Anglican and Sue a Presbyterian—and raised in religious households, it was the couple’s arrival in Toowoomba—Sue trained as a nurse at Toowoomba General and Mothers Hospital—where the couple’s connection with the Uniting Church began as Sue joined St Stephen’s Congregation and the fellowship.

A move to Brisbane saw the couple join the Aspley congregation, where Bruce sat on the committee before returning to Toowoomba.

It was here where Sue became involved in the congregation’s already established Meals on Wheels program, a connection that continues today.

“I still deliver meals with Bruce which means I have served for about 55 years,” says Sue.

“I was vice president of Queensland Meals on Wheels during a time of modernisation and transformation. While that wasn’t all my responsibility, I would like to think that I have played a part in making Meals on Wheels the fantastic organisation that it is today.”

The contribution of the couple to the St Stephen’s community was perhaps no more evident than after a fire in 1989 which resulted in the church’s upper structures and roof collapsing and the pipe organ’s destruction.

Bruce has vivid recollection of seeing the church pews placed out on the street and hosed down by the fire brigade.

“We were both members of the restoration committee,” says Bruce. “There were working bees over the course of a few years to strip the pews down and rebuild them as well as many other tasks.”

During the time of the fire, Bruce was working in real estate and was able to find and arrange the purchase of the site for the relocation and building of the new Meals On Wheels kitchen.

Bruce and Sue have both been heavily involved in various rosters at St Stephen’s and have jointly led the social committee for many years, helping support a number of charitable organisations with fundraising events and regular collection drives.

The group sponsors social activities and annually organises repertory theatre nights to raise funds for Gateway House and St Stephen’s. A weekly collection of groceries for Lifeline began after Sue had the idea after visiting her aunt’s church in Victoria.

When asked what the church has meant to them, Bruce says it has been a place of belonging.

“The association with the people there has made for a better life.”

Sue echoed the sentiment adding that worship is important and caring for people with love.