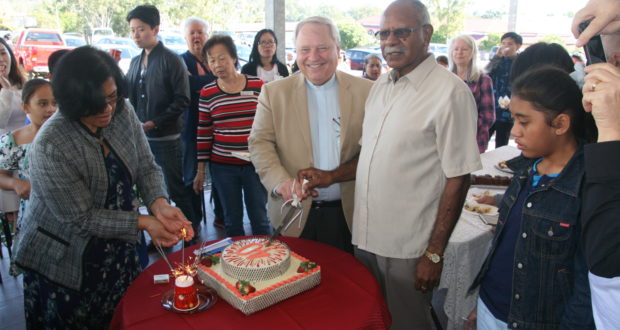 Turning 40 has been equally important across all cultures in the Uniting Church. For our multi-cross cultural congregations it required a celebration of colour, music, dancing, feasting and worship.

Beenleigh Regional Uniting Church was filled to capacity for the most part of Saturday 24 June. All who attended could not help but get caught up with the excitement as the worship space was filled with beautiful harmonies, colourful cultural attire and the rhythm of youth.

In his opening address our moderator Rev David Baker went back in time to the beginning of the church and traced its journey up until now.  This was very fitting and timely as many of those gathered had little knowledge of the Uniting Church in Australia.

The presence of Rev Dennis Corowa reminded the gathering of the First Peoples of this land, the covenant the church made with them, their struggles and aspirations for a better future to include proper recognition and sovereignty.

“Siyahamba” moved us to morning tea where David Baker and Dennis Corowa cut the 40th anniversary cake. The Beenleigh Regional Uniting caterers did wonders to feed the multitude and graciously remained to lend a helping hand for the rest of the day: Vinaka vakalevu!

In his field of expertise, Pastor David Busch interviewed emerging young leaders of Next Gen Arise and effectively opened up conversations around faith, present experiences and expectations for the future of the church. Pastor Noah Kim and Next Gen Arise were heavily involved with the band and as parking directors.

David Busch’s “Called Together” joyously leads us on with confidence to the next 40 years!

This event was organised by the Multi-Cross Cultural Reference Group of the Queensland Synod and made possible by the generous hospitality of the Beenleigh Regional Uniting Church.

Akesa Racava is the chairperson of the Multi-Cross Cultural Reference Group of the Queensland Synod.