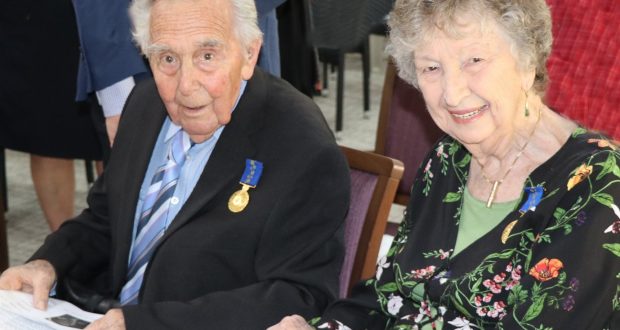 Gerry Zwart with wife Val at the Righteous Among the Nations ceremony, during which he received from the Ambassador of Israel the Medal of the Righteous awarded posthumously to his parents, Marinus and Maria Zwart. Supplied.

James O’Callaghan reports on a member of the Nambour Uniting Church who has been recognised for the heroic efforts of his parents during the Second World War.

Gerry Zwart of Nambour received a shock earlier this year when he was contacted regarding the actions of his parents some 80 years earlier.

During the 1940s the Zwart family lived in the village of Blaricum, 20 kilometres from Amsterdam. Marinus and Maria Zwart were the parents to 12 children. The youngest, Gerry, emigrated to Australia just after the war and is now a member of Nambour Uniting Church.

Two young Jewish girls, both named Bela and friends of Gerry’s sister, sought safety in the Zwart family home for the duration of the war. The Dutch Resistance classed it a “safe house”, meaning others who needed a place to seek refuge were given sanctuary for a period of time.

Nearly 80 years after the war began, Bela van Prag, now Bela Menco of Tel Aviv, instigated recognition for Marinus and Maria as rescuers of Jewish people during the dreadful war.

Gerry Zwart received one of Israel’s highest honours of being recognised as Righteous Among the Nations which was awarded posthumously to his parents for protecting Jews during the holocaust. Their names have been added to the Wall of Honor in the Garden of the Righteous in Jerusalem and they have been made Commemorative Citizens of Israel.

The ceremony was convened by Israel’s ambassador to Australia, Mark Sofer, who said it was important to honour people like the Zwarts despite the passage of time.

“We cannot, must not and will not ever forget their selfless heroism and bravery,” he said.

The service was attended by Len Menco, son of Bela Menco, who travelled from Tel Aviv on behalf of his elderly mother.

“The Zwarts risked their own lives by this heroic humane act,” said Len in an interview with Australian Jewish News. “Not only did they save my mum, they saved her complete offspring of three children and seven grandchildren.”

The Nambour Uniting Church hosted a service attended by the Moderator on 22 September to affirm and celebrate the recognition of the Zwart family.

Rev Ian Stehbens reflected on the importance of the Zwart family’s contribution.

“There are times when social morality collapses,” he said.

“This may occur when the powerful abuse power. Tragically, the response of many people ranges through indifference, complicity, opportunism to justification, endorsement and engagement. Yet in such tragic times a small minority display exceptional courage to uphold and express high values. The world needs more people like Marinus, Maria and Gerry Zwart.”