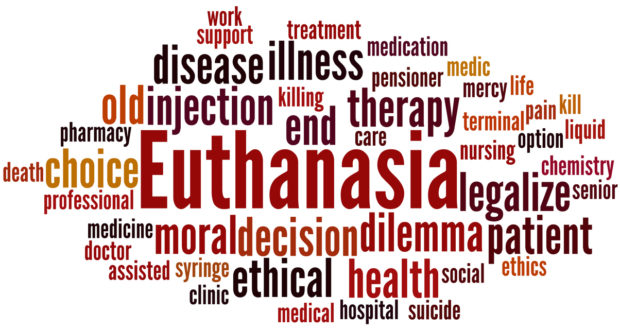 Voluntary assisted dying: we need to hear your voice

Since its inception the Uniting Church has committed itself to bringing the truth of the gospel to the situations of human life, both individually and socially. At times this commitment brings us into the challenging and difficult spaces of life where we face the vulnerability, fragility and ambiguity of existence.

Last year the Queensland Government announced an inquiry into aged care, end-of-life and palliative care. As a result, Moderator Rev David Baker has requested an update of the Synod’s current position regarding voluntary assisted dying. This consultation paper has been developed by a Synod-wide working group. Please check it out, attend one of the consultation sessions, or send in your thoughts before 9 March.

Please share this as widely as possible within the church.

The Caxton Legal Centre with the University of Queensland, Queensland University of Technology and Griffith University run periodic events in the Justice in Focus Series. The next event on 21 February is called An Uncertain Path: Navigating voluntary assisted dying laws in Australia held from 5.30pm to 6.30pm at Wesley House, 140 Ann St, Brisbane. The panel will be drawn from experts in the fields of law, ethics and psychiatry. Registration is essential.

Prayer for our oceans

A Rocha International shared this prayer:

“How many are your works, Lord! In wisdom you made them all; the earth is full of your creatures. There is the sea, vast and spacious, teeming with creatures beyond number—living things both large and small.” Psalm 104:24–25.

“Praise God for his wonderful oceans, which he intended to be full of all kinds of life. Lament for the loss of biodiversity and the pollution we have caused. Pray that the oceans will one day be cleaned of all the plastic and filled with life, and that Christians in particular see this work as a fundamental part of our calling.”

The CSIRO, the nation’s pre-eminent science agency, has cast doubt on the environmental benefits claimed under the federal government’s main climate policy, raising concerns Australia is overstating its contribution to the fight against global warming. Read more…

Another article looks at how Australia plans on meeting its Paris commitment. What is Australia’s “fair share” of the heavy lifting needed to stay below 2 degrees of global warming? By 2050 that would mean two tonnes of CO2 per person—in 2018 Australians were responsible for more than ten times that, on average.

One in five parents had payments cut

ParentsNext is Australia’s contentious job-ready scheme for disadvantaged parents of children aged six months to five years. In the program’s first six months, 21 per cent of participants received a payment suspension. The Australian Human Rights Commission argued the ParentsNext program was “manifestly inconsistent with Australia’s human rights obligations”. Social service providers and legal groups are calling for the program to be overhauled or scrapped. Most of these parents have no other sources of income. Read more.

Why are so many older Australian women becoming homeless?

At her lowest point, Gail Carter considered pitching a green tent outside her mother’s public housing unit so she had somewhere to sleep. Gail is one of a growing number of older Australian women on the verge of homelessness.

Recent ABS statistics show a 42 per cent increase in people over 65 paying unaffordable rents in Australia since 2011, including 132,301 people whose rent is more than 30 per cent of their income. Less than two per cent of available housing stock was affordable and appropriate for a single woman on an age pension. Read more about Australia’s homelessness crisis.

A recent joint media release by the Prime Minister and Immigration Minister underlined a dramatic tactical shift in the government’s position on people seeking asylum and offshore detention.

“In public, the government will call this a win and boast about evacuating this last child,” said David Burke, a senior lawyer with the Human Rights Law Centre. Read more about this ongoing nightmare.

Queensland inquiry into imprisonment and recidivism

The Productivity Commission is conducting an inquiry for the Queensland Government to determine how government resources and policies may be best used to reduce imprisonment and recidivism to improve outcomes for the community. The draft report (358 pages) and a summary report (42 pages) are available and submissions can be made until 17 April. Read more here.

Every step counts! The UNHCR (the UN refugee agency) has an invitation for you! Families who have been forced to flee their homes make extraordinary efforts to survive. At a time when there are more and more global crises forcing people from their homes, we are coming together to honour their resilience and determination to keep their families safe. Join today and all over the world people will walk, run and cycle the distance refugees cover each year to reach safety.

One in three Australian kids in rural and remote areas who have developmental, learning and mental health concerns are without access to specialist health care and educational support just because of where they live. Families have to travel hundreds of kilometres and face long waiting lists for limited services. Royal Far West requests we sign the petition to urge Health Minister Greg Hunt to give country kids the same health services as city kids.