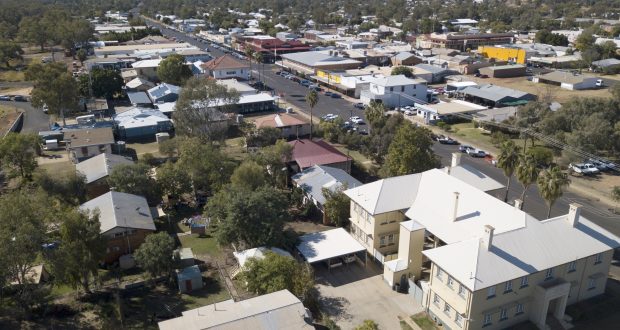 aerial view of the Queensland town of Charleville.

The next Solidarity Sit-down will be held on Friday 29 November from 1–3pm, at Queen’s Gardens, Corner Elizabeth and George Streets in the Brisbane CBD. Attendees will sit shoulder to shoulder and hear from people on the frontline of the climate crisis and donates will be collected to support those impacted by and fighting the fires. Bring a cushion and show solidarity with everyone on the frontlines of this crisis. See ARRCC Queensland Facebook page for more information.

This is a global event which aims to help homeless and displaced people around the world. For the first time, Brisbane’s event will be at The Gabba on Saturday 7 December. One hundred per cent of the funds raised in Brisbane will go towards registered charities helping people who are homeless or displaced, with half to international efforts and the other half to Mercy Community, Romero Centre based in Brisbane.

Read the story of a woman who worked to reduce homelessness in Chicago by 25 per cent. She has come to Australia to help Adelaide do the same. The Adelaide homelessness sector has collaborated to adopt a collective impact effort—The Adelaide Zero Project—with the goal of eradicating rough sleeping by the end of 2020. Read more here.

A sad and sorry history of Newstart

“Much has been made of the fact that federal government unemployment benefits haven’t increased in real terms since 1994. But why has the freeze gone on so long?” Pro Bono Australia takes a look at the history of Newstart and the long-running battle to raise the rate.” This article clarifies this issue which is having such devastating impact on so many Australians today.

One young man’s experience of unemployment

Youth unemployment in Australia has risen to an 18-month high. One 23-year-old describes some of his experiences, including the impact of not being able to drive, a significant barrier for over 40 per cent of young unemployed Australians.

“Men who conform only to rigid stereotypes of how to be a man are more likely to have sexist attitudes and behaviours, which in turn makes them more likely to perpetuate violence against women, according to a report by Our Watch and the Victorian Office for Women”. Read more here.

This is very useful information for those working with men and boys to prevent violence against women. We all need to think deeply about this subject.

The Killing Times is a collaboration between The Guardian Australia and researchers at University of Newcastle. They investigate and publish information about the mass killings of Aboriginal people throughout Australia between the 1820s and the 1930s. As lead researcher Professor Lyndall Ryan says, “The cover-up has been so profound, and this is just a very important part of it. The cover-up of massacres is an important part of white Australia.”  Check out this Guardian article and the interactive map.

Women wearing headscarves while shopping are the most likely targets of Islamophobic incidents. 72 per cent of victims were women, mostly wearing a hijab or scarf at the time. Nadia Saeed was victim to a horrifying attack in Brisbane and tells her story in this article. Luckily, a bystander came to her aid, but that is quite rare. It is believed that while many are often aware of incidents, they don’t feel empowered to intervene. What would you respond if you witnessed an incident on the train, or in the shopping centre?

One day to make a world of difference

Tuesday 3 December is the day to harness and amplify generosity worldwide, giving people the opportunity to give back to the communities and causes close to their heart.

Nearly half the world’s population (3.1 billion people) love on less than $2.50 a day. Ending global poverty is a priority for UnitingWorld. UnitingWorld needs your help to raise $25,000 on “Giving Tuesday”. Please give what you can.

How you can back the bush

In this time of terrible drought in most of Queensland, here are some ideas to help out.

Helping us lead a plastic-free life

Here is The Lifehacker’s Guide to Living with Less Plastic (The Ultimate Cheat Sheet to a Plastic-Free Life)!  Plastic has become one of the most harmful materials to our environment. This guide has loads of information—what it’s like to live plastic-free; fitting plastic-free lifestyle into your budget; minimising plastic in the most important areas of your life, and much more.