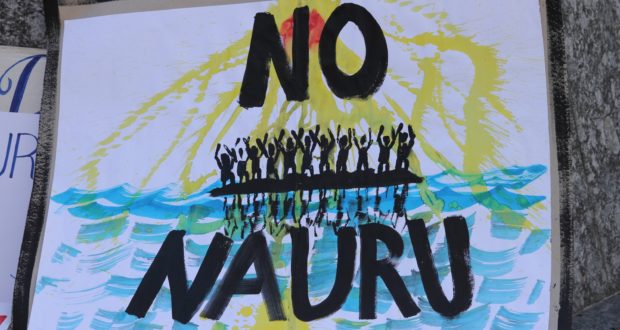 The inaugural Fairtrade and social enterprise Christmas markets and community discussion will be held on 11 November from 2:30 pm to 8 pm at the Lakes College. Featuring a large range of craft, clothes, food/coffee stalls, the evening will finish with a community discussion on the significance of the proposed Modern Slavery Bill 2018 and our role in ethical purchasing. This exciting event is being co-hosted by the Queensland Synod.

Love Makes a Way, Common Grace and Kids Off Nauru are coming together to pray, to lament, and to witness to a better way for children on Nauru. We come from many different traditions, but on Friday November 2, we’ll unite at St Andrew’s Uniting Church, Brisbane from 6.30 till 7.45. Please join us there. If you are not in Brisbane, please consider organising your own prayer vigil. Contact Sue Hutchinson for liturgy resources.

Kids on Kids off Nauru

A group of Aussie kids have appeared in an advertising campaign recently launched asking the Prime Minister to save more than 100 young children in desperate trouble on Nauru. Doctors who have visited the children say that they will start dying if the government doesn’t save them and bring them to Australia. The former Head of Mental Services on Nauru called their treatment a “form of torture”. The young Australians have been corresponding with the children on Nauru and trying to bring some happiness to their days.

The new report Child Social Exclusion, Poverty and Disadvantage in Australia captures the multidimensional nature of disadvantage in Australia and its impact, providing a unique perspective through the eyes of the child. One in six children aged zero to14 years live in poverty. Child social exclusion means lost opportunity, marginalisation from the life of a community and the risk of leading lives of unfulfilled potential. As this Eternity News article suggests, poverty is about income, not social ability.

Uniting NSW and ACT is leading the national Fair Treatment campaign which was launched recently in Sydney. Uniting says the war on drugs is not working and that the response to illicit drugs needs to change. In 2001 the Uniting Church in NSW and ACT supported the establishment of the Uniting Medically Supervised Injecting Centre (MISC), which made Australia a world leader in this arena.

Australia’s mental health services will receive a $52m boost to cut waiting times for desperate teenagers struggling with anxiety or depression. Some of this money is dedicated to offering online support to youngsters in rural and remote areas. National youth mental health foundation Headspace will now be able to employ more staff and provide 14,000 extra services at its 107 centres across the country.

Foodbank’s new report reveals a growing problem in country areas where last year 1.5 million Australians experienced the uncertainty of not knowing where their next meal was coming from. This means that people in regional and remote areas are 33 per cent more likely to experience food insecurity than their city cousins. This is a fascinating read about a shocking situation.

Join us in the journey

In good news, Australia’s Modern Slavery Act is now well into the parliamentary process, having been to the Senate last week and now set to return to the House of Representatives. However, we need this Act to be robust!

Send a postcard to the Prime Minister. Order a couple of packs for free from STOPTHETRAFFIK and get your congregation and friends on board!

Make sure you watch this

The two-part documentary How Mad Are You was recently aired on SBS and is now available online for viewing for the rest of October. This series takes a unique look at mental health. Ten Australians from all ages and backgrounds spend a week together. Five have a history of mental illness. Five do not. Who is who? Questions are raised about the meaning of diagnosis, stereotypes and stigma, and about the social implications that come with the label and the value of seeing the person behind the diagnosis.