Home > Scoop > Take a moment to send your love 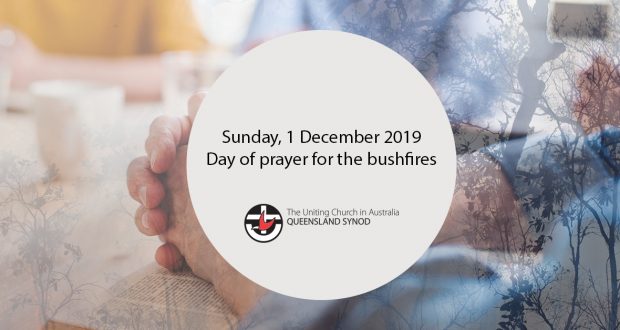 Take a moment to send your love

Ahead of the day of prayer for the bushfires on 1 December, Rev Suzy Sitton reflects on the impact of the recent events in the Yeppoon and Capricorn Coast region.

From 9 and 15 November, our kitchen was covered with black ants. They marched around the ceiling, down the walls and made their way to the pantry and found the only open bag, a bag of crystalline ginger. They also located the water tank of my coffee machine. The little creatures were in a panic.

By Thursday they had disappeared, taking their morsels back to their nest. My friend, who lives 100 kilometres away shared how the bees came in through her kitchen window to drink from the black coffee cup. Not from the glass or the white lined cup, but only the black cup. As she filled the cup, she noted that they consumed 300 millilitres of water each day.

During the weekend at our Central Queensland Presbytery meeting in Mackay from 9 to 10 November, we received regular alerts about the fires that were impacting properties near Yeppoon. On our way home, we decided not to take the short cut home as that road was being used for emergency services and evacuations. As we neared home on Sunday afternoon the smoke became dense with poor visibility. We continued to monitor the situation, but we were at a loss to know what to do.  As I prayed “Lord, show me where I need to be,” I was encouraged to wait, observe, listen, and be prepared for the call.

On 11 November, I received a call that the Remembrance Day service that I was scheduled to lead had been cancelled due to risks. Most of the State Emergency Service workers were involved alongside the Rural Fire Brigade and the Queensland Fire Emergency Services personnel in fire containment. Instead, we held a small service at Blue Care Capricorn Gardens and began with a prayer. “For all those men and women who are serving in the Queensland Fire and Emergency Service, State Emergency Services workers and volunteers who are currently facing the fires and struggles with nature for the welfare of others. We ask you to take a moment now to send your love to those on the front line and those who have been evacuated.”

On Sunday 17 November,  I sat beside a member of our church, who with tears in his eyes said, “We’ve been through the floods of 2011, Severe Tropical Cyclone Marcia of 2015 and now these fires. We can’t go home yet, but we will. We love living here.” We can still be joyous people of God even with the devastation of bushfires around us and the ongoing drought conditions.

Jesus issues a remarkable invitation to his followers: you are to be the image of God you were created to be.  In the cross and the resurrection of Christ we see that God enters into human suffering in order to transform it.

As the Capricorn Coast church community walks beside our neighbours affected by the fires we listen and comfort and offer a cup of living water.

Rev Suzy Sitton is the Minister at Capricorn Coast Uniting Churches. She is also the author of Christmas is a community affair on the Capricorn Coast and Mustering ministry.