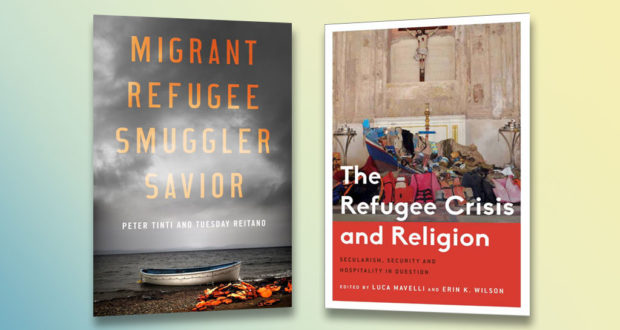 The subject of migration is never too far from the news headlines in Australia, Europe and North America but with the recent release of two books—Migrant, Refugee, Smuggler, Saviour and The Refugee Crisis and Religion—issues around people smuggling and Islam are getting more attention. Nick Mattiske reviews.

We are living in a new age of migration with over 60 million people currently displaced worldwide. This has prompted compassionate responses but also, as we are well aware, the tightening of national borders and accompanying fear-mongering.

Christians generally embrace an ethos of welcoming the stranger, but when it comes to Islam they may be wary, influenced by a mainstream media that is either indifferent or sensationalist, alarmist and stereotyping. Recent terror attacks have only fanned the rhetoric.

Migrant, Refugee, Smuggler, Saviour moves past the stereotypes to look at the refugee crisis in Europe in depth, and with a personal, biographical perspective. While the book surveys the scale of the problem, it also focuses on individual migrants and refugees themselves (the line between the two is not so clear), whose stories range from the quite ordinary to the horrific. Then there are the people smugglers, who range from opportunists operating at the fringes of the law to rapists and murderers.

While governments and some citizens increasingly see those who make it into Europe as a problem, more alarming is the number of asylum seekers who don’t make it. Thousands have died trying to cross the Mediterranean.

But of course it is the issue of Muslim migration that is getting the most press. The editors of The Refugee Crisis and Religion say that in the “crisis” the “elephant in the room” is the issue of Islam, though this is hardly unspoken, as leaders such as President Trump feel increasingly free to demonise on the basis of religion where they would not when it comes to gender or race (though Trump himself feels free to insult anyone).

The writers gathered in this book note that the overriding secular narrative in the West, which sidelines religion as private and subjective, often portrays Islam as incompatible with the West, and, at worst, a breeding ground for terrorists.

The other side of this is that secular humanitarian efforts have often avoided religious talk. While the politics of fear have ramped up, one positive note is the recent recognition globally that suppressing refugees’ religious identities is a form of discrimination, and that faith-based organisations have a role to play in catering to refugees’ spiritual needs.

The book notes that displacement is a key theme of the Abrahamic faiths, through Abraham himself and his descendants, to Jesus and Saint Augustine. This heritage means that Christians will continue to be in the forefront of caring for those who are marginalised by the Western mainstream.