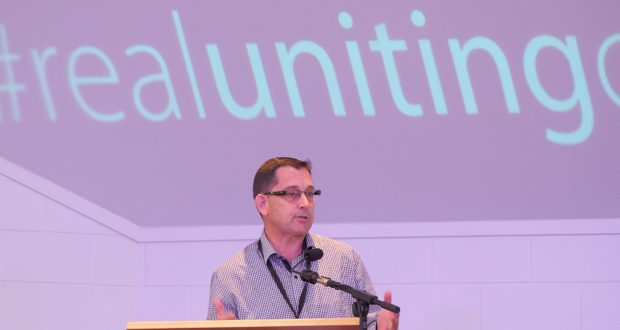 Schools and Residential Colleges Commission chairperson Peter Campbell addressed the 33rd Synod highlighting the commission’s critical work of faith formation for the approximately 13 500 students in its portfolio of schools and residential colleges.

Peter also spoke to the commission’s report and its work around religious education framework in schools.

“The religious education framework is about answering the question (and lots of people ask this question): ‘Why are we in schools?’

“We are in schools to go about creating faith formation, we’re in schools so that we can ensure that young people are engaged and can create an identity in a faith environment.”

Mark Bensley—Schools and Residential Colleges Commission executive officer—also addressed Synod members with an introduction about his role within the Synod, citing Ephesians 4 as instrumental in his calling to the role with the Uniting Church: “So Christ himself gave the Apostles, the prophets, the evangelists, the pastors and teachers, to equip his people for works of service, so that the body of Christ may be built up until we all reach unity in the faith and in the knowledge of the Son of God and become mature, attaining to the whole measure of the fullness of Christ … speaking the truth in love, we will grow to become in every respect the mature body of him who is the head, that is, Christ. From him the whole body, joined and held together by every supporting ligament, grows and builds itself up in love, as each part does its work.”

“We are each part of the body of Christ, we are each contributing to the great ministry of the Uniting Church,” said Mark.

Mark highlighted the growing connection with ecumenical schools as the church increases its influence there and supports those school communities.

Much work has been done to support safe places of ministry including the updating and modernising of child protection policies as well as assisting schools to comply with the Uniting Church child safe framework, the Uniting Church safe ministry with children framework and the national Safe Schools framework. Rollout of a self-assessment and audit tool was also done so campuses could reflect on their practices and see how they are traveling in this important area.

Speaking specifically of Shalom Christian College and their work responding to the Royal Commission into Institutional Responses to Child Sexual Abuse, Mark detailed the extensive actions being taken to support and mentor the senior management team and board, assist the school in their operational responses to the Non State School Accreditation Board investigation and help improve student attendance and student engagement.

The commission’s report was received through consensus.