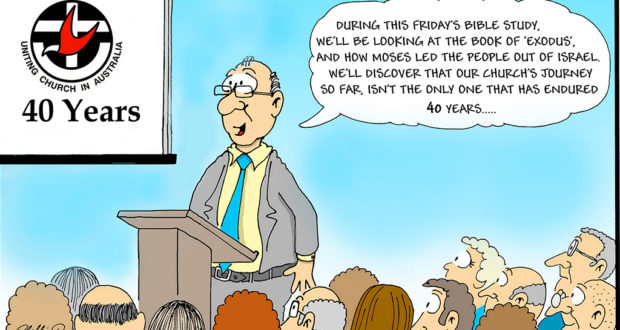 For most of the members of the Uniting Church, our own personal 40th birthday is a distant memory!

Some of us may wish that we were there again, wistfully believing that we’d do the years after 40 differently if we had that time again. If we don’t have some sense that we would have done things differently, maybe we haven’t reflected on our lives enough. But, while there’s life, there’s hope, so start those changes now!

To those under 40, don’t worry, God willing, your time will come!

The 40-year “mid-life crisis” is a time of opportunity. It should be about taking time to assess and discern; to toss out or radically amend that which will not be useful for the next stage of the journey; to take up new things for the next leg of the race.

In short: it’s a major overhaul.

The president of the Uniting Church called the moderators and general secretaries to 40 hours of prayer last month, to kick off 40 days of prayer before 22 June, our 40th birthday.

The last two Synods in Session have been exercises that fit the “where to next” idea. We’ve been discerning new directions.

The work the general secretary is doing with the Synod office also fits that theme of “where to next”. Work is being done on different funding models for growing and overseeing congregational life and on how the placement of ministers process operates; these are significant changes being undertaken as a result of reflecting on our life.

We’re investing in helping the next generation of young leaders from immigrant communities find their mojo in the church. We’re also investing strongly in “younger” ministerial leaders so they can “discern the times” and bring the gospel to bear in new ways.

For me, the two main themes that emerged during our 40-hour prayer session were the classic 40-year review themes: let’s renovate what needs to be renovated (and we need to think about how courageous we’ll be in doing that). Another theme that’s very dominant in our tradition, but one we’re not managing well today occurred to me: how are we handing over to those coming after us? This is a powerful and dominant theme in the Scriptures—from Abraham to Paul—yet I’m not sure that the baby boomer generation has really got this idea deep in our psyche …

One thing’s for certain: we can’t hold on as time and the spirit of God are moving on!