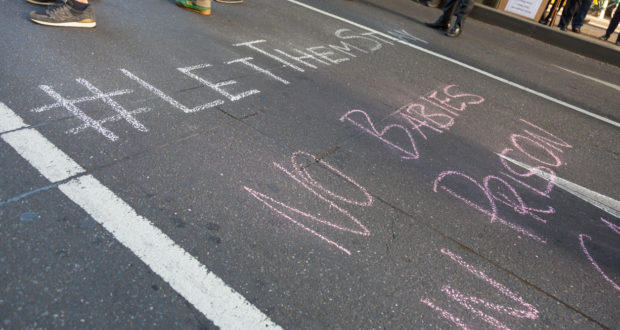 Melbourne, Australia - February 4, 2016: Refugee activists along with the Socialist Alliance and University Students, protest in Melbourne against sending children back from onshore camps to Nauru offshore centres.

Join Queensland Synod Moderator Rev David Baker and people of faith calling on our government to end the cruelty to the children on Nauru. Hosted by Love Makes a Way, with Common Grace, Australian Churches Refugee Taskforce, World Vision and Micah Australia.

The vigil will be held Friday 2 November at 6:30 pm at Saint Andrew’s Uniting Church, 299 Ann St, Brisbane (near Central Station). RSVP and share.

Human rights are standards that allow people to live with dignity, freedom, equality, justice and peace. QCOSS and the campaign for a Human Rights Act for Queensland are offering this event discussing where our Human Rights Act is, what it might contain, how it will be of benefit and how the push for this important reform can be sustained. Keynote presentation by Scott McDougall, Anti-Discrimination Commissioner of Queensland, followed by a diverse panel of experts who will reflect on the importance of a Human Rights Act in their specific domain.

MSF staff speak about their eviction from Nauru

Médecins Sans Frontières/Doctors Without Borders staff speak about the mental health situation for refugees, people seeking asylum and the local community on Nauru. They describe the mental health situation of refugees on the island as “beyond desperate” and call for the immediate evacuation of all refugees and people seeking asylum from the island, and for an end to the Australian offshore detention policy.

Inside a secret safe house

There is no place like home, but what happens when it’s the most dangerous place you can be? Women’s Weekly visits a women’s refuge which offers hope to the growing number of women being forced to flee for their lives.

An Australian Institute of Company Directors (AICD) survey found that the number one issue Australian company directors nominated for the federal government to address in the long term is climate change. They are heeding warnings from regulators about the risks of climate change and the fact that they might be held liable in the future for failing to act. Investors are also pushing them to act. Directors are frustrated by the failure of political leaders on issues like energy policy.

In fantastic news from Europe, the European Parliament has overwhelmingly backed a wide-ranging ban on single-use plastics to counter pollution in seas, fields and waterways. This will take effect from 2021. Nations will also have to recycle 90 per cent of plastic bottles by 2025. Come on Australia!

An explosive Four Corners report has revealed how Australia’s gun laws are being steadily eroded by a cashed-up gun lobby. These laws have kept our communities safe for decades, likely preventing 16 mass shootings since the tragedy at Port Arthur.

Learn about the gun lobby’s NRA-inspired campaign and their increasing political influence. This is 45 minutes well spent.

Free the power of great giving this Christmas

UnitingWorlds’ new ethical gift catalogue for 2018 is out now! When you give an Everything in Common gift you’re giving twice: once to friends and family to let them know you’re on board with their passion for a better world; once to people in Asia, Africa and the Pacific who are working hard to make it happen. Shop now online. How about hosting a gift stall in your church/community? Contact Mardi Lumsden.

The campaign for the release of all refugee children from Nauru by 20 November has gained momentum over the past week. The harm caused to kids in indefinite offshore detention can only be stopped by taking them out of Nauru and resettling them in a safe place like Australia. If you haven’t yet, please take a selfie with a #KidsOffNauru sign and share on Facebook, Twitter and Instagram. Also, please call your local MP and Senators.