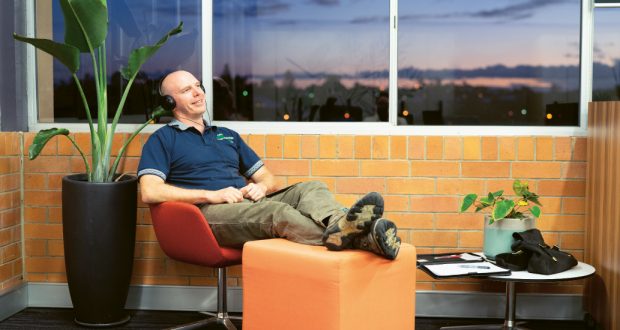 Trinity College Queensland’s latest educational resource Trinity on Tap has opened up an accessible world of theology for the whole church and has given people a new way of learning about the Bible without stepping foot in a lecture room. Journey reports.

Stuck in early morning gridlock and keen to make the most of your time as you wait for the car in front to inch forward ever-so-slightly? Maybe you’ve been hitting the treadmill and that playlist of electronic dance music is starting to grow stale? Or perhaps you’re looking forward to a Sunday afternoon on the sofa but still want something to stimulate your thinking after the morning service?

Trinity on Tap was designed for these types of situations as increasing numbers of people consume audiobooks and podcasts. In 2018 Southern Cross Austereo studied podcast consumption in Australia and found that new podcast listeners (18–54 years old) grew by a whopping 52 per cent compared with the previous year and 53 per cent of people were listening to podcasts during car commutes and 44 per cent during public transport commutes.

In short, the podcast has cemented its status as a major media platform and for Trinity it was a perfect way to transform their unaccredited short courses into something people could access anywhere and anytime.

“In our increasingly tech-savvy, time-poor context, people want access to educational resources that don’t impinge on their lifestyles,” says Trinity College Queensland Principal Dr Paul Jones who hosts the Old Testament series. “Podcasts fit the mould perfectly, enabling people to tap into these resources when it
suits their lifestyle; the goal here is to drop these educational materials into people’s already-full lives, not to demand that they stop what they’re doing in order to think about the Bible.”

Launched at the 34th Synod in Session, Trinity on Tap’s first series on the Old Testament features 21 podcasts—most are around 20 minutes—and a supplementary PDF workbook which users can read on their device or print out.

“The series is structured around major movements in the Old Testament story that intersect with our own life stories,” says Paul. “The topics range from our sinful natures and bad habits through to our call to look like God and bless the world with the gifts God has given us.”

From reflecting on the chaotic sea monsters of Genesis to thinking about what Psalm 1 says about the power of habits, the Old Testament series is a perfect introduction to 39 ancient documents which challenge many Christians given their language and cultural differences to our own present-day context.

“While these ancient texts weren’t written to us, they are for us,” notes Paul. “The underlying message of the series is that the Old Testament is very relevant to life in 21st century Australia.”

The series may have been recently released but feedback so far suggests that the resource is already gaining traction within Christian communities. Some groups have informed the college they are now using the resource in weekly Bible study groups while one listener said he listened to the entire series while driving to work.

Trinity College Queensland student Ben Reid says the series reinforced his faith and highlighted how the Old Testament integrates with the New Testament.

“Those of us who have grown up in the church think we already know everything there is to know about the Bible,” says Ben. “So many resources just regurgitate the same old stuff so I love when a reputable resource like Trinity on Tap opens my eyes to fuller, richer understanding of a text; there were things I learnt in Sunday School but never realised that my understanding was somewhat basic and there was so much more to learn and understand from the texts.

“This is a beautiful resource that gently pushes the listener to re-examine their understanding of the Old Testament. We often run to the New Testament to learn about Jesus however the Old Testament has so much to teach Christians about our God.”

Three more series on the New Testament, Theology and Preaching will be released over the next year, but for now listeners are encouraged to provide feedback to the college on the Old Testament series.

“Our hope is that listeners will spread the word if they find this resource useful, and gear up for the next podcast series”, says Paul. “If listeners want to go deeper, we’d love them to get in touch about what that might look like and how Trinity can support their ongoing theological learning.”