Home > Culture > Behind the soundtrack to your faith 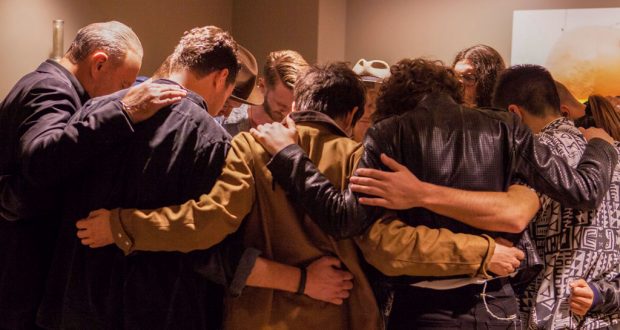 Members of Hillsong United gather to pray before a concert. Photo: Pure Flix

Behind the soundtrack to your faith

If you’re dismissive about Hillsong: Let Hope Rise (2016) “preaching to the converted”, you’re missing the point—because that’s actually their purpose. They are fundamentally a C2C (church-to-church) resource that is serving the global church—and this documentary, and their music, is for us.

“We’re the biggest band you’ve never heard of.” Hillsong United Jad Gillies’ statement couldn’t be truer of the band that has sold about as many albums as Beyoncé.

Since 1998, this worship juggernaut, along with a host of Hillsong Music Australia’s band subsidiaries, have resourced the global church in worship, slipping quietly under the radar of mainstream culture—until now.

The chart-topping band is breaking sales records and filling stadiums bigger than they, let alone outsiders, can fathom. But with this attention comes a higher level of scrutiny than any other Australian-based church.

When “non-religious” Hollywood filmmaker Michael Warren chose to chronicle the band’s preparations for a 2014 concert, he didn’t have an agenda (other than to tap into the Christian market). And while his personal faith hasn’t changed, there couldn’t be a documentarian who speaks more highly of his subjects.

Despite my general reservations about mainstream Christian media, I was pleasantly surprised at the level of frankness Michael garnered from the band members, particularly in relation to their home lives and personal struggles.

Audiences may expect the stylish musicians to live an Instragram-glossy life on the road but what shines through is pure sacrifice: a group of young adult leaders who have given their lives to Jesus and his church by living away from their small children and spouses for months at a time, writing and practising songs at three in the morning, all the while taking low salaries in return.

Journalist Katie Rife of the A.V. Club jadedly writes of the band members’ naivety in accepting low wages and traditional family arrangements without question. The New York Times’ Andy Webster claims “these tunes won’t keep you awake” and are rife with a “torrent of clichés”.

And yet, this will not deter Christians because, as Nick O’Malley of The Sydney Morning Herald correctly asserts, these songs and this film, are meant to inspire and encourage churches everywhere.

So here’s the thing: Hillsong doesn’t need your approval, because if their music doesn’t reach you, it’s not for you—and no amount of criticism will stop their reach.

Visit theaters.hillsongmovie.com to find a screening near you.