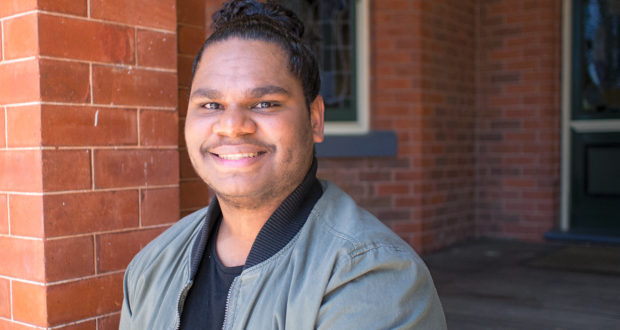 Already a role model in his home town of Mapoon, a small community an hour’s drive from Weipa in Queensland’s far north, Royston Sagigi-Baira speaks to James O’Callaghan about his career highlights, connection to the Church and his hopes for the future.

Royston, who relocated to Brisbane last year to attend the Aboriginal Centre of Performing Arts, hopes to draw upon his faith to inspire others on the back of his musical talents.

Royston’s passion for music started when a teacher gave him a High School Musical DVD as an end of year gift.

“Once I went home, I watched that every day,” says Royston. “From that point on, I dedicated my life to music.

“Music is also a way for me to represent the Aboriginal and Torres Strait Islander people, and show them that if I can do it, so can you.”

Royston describes the highlight of his career to date as a trip to the United States last year to perform at some of the country’s most iconic events.

“It was my first time overseas and I felt blessed to have the opportunity,” says Royston.

“We were lucky enough to perform at the Thanksgiving Parade in Chicago and the Hollywood Christmas Parade in Los Angeles. We also recorded at Paramount Studios in Los Angeles where Pink, Beyoncé and Bruno Mars have recorded.”

The cost of Royston’s trip was funded with the support of the Mapoon Aboriginal Shire Council, an Indigenous business in Sydney and the general public who supported through a GoFundMe
page he created.

On his connection to the church, Royston credits his local pastors, James Hughes and Rev Michelle Cook, who were instrumental in developing his faith.

“If it weren’t for them, I wouldn’t know as much as I do about Jesus,” he says.

“They used to pick me up from home and after school and take me to Church.”

“I feel like God has been by my side the entire time. I just have to pray for him, and he answers.

“Seeing how everything has fallen into place, it is like it is meant to be and I know that Jesus has been blessing me.”

When asked about his hopes for the future, Royston says he hopes to become an Indigenous role model.

“As an Indigenous person I find there is rarely a role model who is Indigenous,” he says.

“You might come from a remote community and it might not be easy, but as long as you work hard, you can make it.”