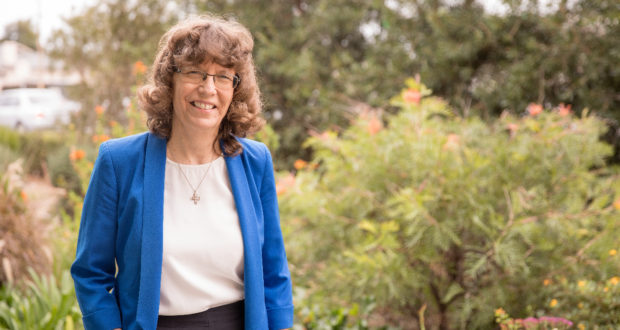 Youth worker, Christian educator, academic, theologian, social worker, counsellor and Moderator: Dr Deidre Palmer has held many roles throughout her life but she will soon add “Uniting Church President” to the list when members of the 15th Assembly meet in July. Matt Pulford profiles our next president.

Dr Deidre Palmer chooses her words carefully when asked about her call to church leadership.

“I’m probably more called to discipleship than leadership,” she says.

“As an educator, as someone who contributes to people’s formation in faith, I see leadership arising from inviting people into a deeper relationship
with God. So I actually think leadership grows out of discipleship.”

From 8 July 2018, Dr Deidre Palmer will extend her invitation to discipleship to the whole of the Uniting Church in Australia and beyond in the role of president.

When Deidre receives the symbols of ministry from outgoing President Stuart McMillan at St Michael’s Uniting Church in Melbourne, she will become the Uniting Church’s 15th president but only the second woman in the role (Dr Jill Tabart was the first, serving as President from 1994 to 1997).

“Abundant Grace Liberating Hope” is the theme Deidre has chosen for her term.

“This theme highlights for me Christ’s call to be a church that embodies God’s abundant grace, compassion and love—a church that is a bearer
of Christ’s hope and light in the midst of despair and darkness.

“The overflowing of God’s abundant grace will be seen as we create communities and contribute to a world where people experience God’s good news of reconciling love, healing and hope.

“God’s gift of abundant grace calls us to be a people who share our gifts, resources, time and energy generously.”

Deidre grew to appreciate God’s abundant grace at the Seaton Methodist Church in the western suburbs of Adelaide in the early 1970s.

Her formation took place in an era of great creative ferment. Tradition was under challenge on many fronts from music to social justice. While Bob Dylan prophesied, “The Times they are a Changin’”, the peace, anti-nuclear, women’s and land rights movements all competed for Deidre’s attention.

“I was fortunate enough to be nurtured in a church that gave voice to those movements,” says Deidre recalling the justice ministry of Rev Dr Geoff Scott and the distinctive talents of songwriters like Ian Coats, Robin Mann and Rod Boucher.

“Seaton was a small, very vibrant suburban church that was deeply committed to nurturing its young people in faith. We were given lots of opportunities—leading worship, bible studies. They were very consultative about the way we shaped our life as a congregation.”

“Geoff Scott encouraged people to think theologically about why they were passionate about justice—and how this came out of the radical call of Jesus to identify with the poor and to bring freedom to the oppressed.”

Church activities were a big part of Deidre’s life, through high school and while she completed a Bachelor of Arts and Diploma of Education at Adelaide University.

“Every year I used to go to the Mount Barker Easter camp and one year I heard about the Order of St Stephen which gives lay members the opportunity to give a year of voluntary service to the church.”

“I heard God’s call to that ministry through the encouragement of a number of Methodist leaders.”

Deidre’s offer of service coincided with a new Sunday School curriculum for the Methodist Church in South Australia. She was quickly enlisted into its rollout, working from the Methodist Conference office in Adelaide.

“As young adults we felt that it was a movement of the Holy Spirit in our time,” Deidre recalls.

“The churches were coming together—not in a marriage of convenience or reasons about finances or efficiency—but because this is what the Spirit was calling us to do.”

Deidre and a group of young adults travelled to Sydney to attend the first Assembly at Sydney Town Hall on 22 June 1977.

“It was a really exciting time to be part of the creation of this Australian church.

“I still believe today that the Uniting Church is a movement of the Holy Spirit.”

Back home in Adelaide, Deidre continued working in youth ministry.

“We invited people to engage with biblical stories through their own life experiences,” explains Deidre.

“Confirmation for example, went from, ‘Read this book about the church’ to asking questions about ‘What’s it like for you to encounter God?’

“Christian Education transitioned from a ‘schooling-instructional’ approach into a more relational experience of belonging to a Christian community.”

They married in 1978. Life was a “wonderful adventure” with Deidre working at the South Australian Synod in Children, Youth and Young Adult Ministry and Lawrie as a doctor.

In 1981 the Joint Board of Christian Education invited North American academic and religious educator, John Westerhoff to Australia to speak about intergenerational ministry.

“I heard Westerhoff speak in Adelaide. At the time he was doing the academic work for what I thought the Uniting Church was embodying in its approach to ministry,” says Deidre.

“I spoke to him, as I’d been looking at doing some further education. He suggested I do a Master of Religious Education where he taught at Duke University in North Carolina.”

A few months later Deidre and Lawrie were living on campus at Duke Divinity School. While Deidre completed her Master of Religious Education, Lawrie undertook a Master of Public Health at the University of North Carolina.

At Duke, Deidre studied systematic theology with Professor Frederick Herzog who’d studied with Karl Barth. It was through Herzog’s teaching that Deidre engaged with the work of liberation theologians, including the writings of Gustavo Gutiérrez.

“This was an amazing opportunity. Something I’d never anticipated,” explains Deidre.

“Reflecting on it since, being Christian and following Jesus gave Lawrie and I the courage to do things that we wouldn’t ordinarily have done.”

After two years in North Carolina she was ready for the next challenge—a PhD at Boston College with Thomas Groome. Groome’s educational approach, Shared Christian Praxis has contributed to the shape of Christian formation in Australia and in many other countries.

Boston College is a Jesuit university and Deidre was the first Protestant accepted into the doctoral program in religious education and theology. There she took courses with feminist theologian Rosemary Radford Ruether and Gustavo Gutiérrez. She read the works of Elisabeth Schüssler Fiorenza and Christian ethicist Margaret Farley.

“I studied with women who were gifted leaders, but saw how they were denied full participation in some of their local Christian communities,” recalls Deidre.

“These people inspired me and sparked my thinking on how we respond to inequality and injustice in our churches and other social and economic structures,” recalls Deidre.

“When you see and experience abuse of power it reinforces the importance and radical nature of the discipleship of equals, to which Jesus calls us,” says Deidre.

The title of Deidre’s doctoral dissertation was “An educational approach towards a discipleship of equals in a socially prophetic church.”

By 1986 it was time to head home to Adelaide to write up her thesis. The family had grown with the arrival of daughter Kate.

Deidre’s doctorate was conferred in 1989, and after the high intensity of North American academia Deidre settled back into teaching and editing a Christian Education curriculum.

Deidre applied for the position and was successful. The family headed back to the United States, for the foreseeable future.

“I loved my job in Dallas,” says Deidre. “I loved the teaching and the students and the community life were amazing.”

The communion of women sharing their lives and faith was a powerful influence.

“I had a fabulous group of women colleagues. We used to meet every week for lunch as faculty to support one another. They were amazing women and I’m still in touch with some of them.

“We also had a fantastic church that was embedded in its neighbourhood, with a great minister, Kathleen Baskin who effortlessly integrated evangelism and social justice. She and I met for coffee every week to share our faith and support one another.”

In the meanwhile Deidre’s contract had been renewed at Perkins and Lawrie had a job at the University of Texas Medical School teaching family practice while working himself in a family practice.

Again a deep sense of call drew Deidre back to the Uniting Church.

On a trip home to Adelaide in 1997 Deidre heard there was a faculty position vacant at Parkin-Wesley College and the Adelaide College of Divinity.

“I felt that in being in ministry in the Uniting Church I was pouring my energy into a church whose vision I was deeply committed to—to the equality of women and men, to every member of ministry, to the voice we give to children and young people,” says Deidre.

So she applied and won the position at Parkin-Wesley coordinating lay education, teaching Christian education, feminist theology and family and children’s ministry. She still lectures in Christian Education at Adelaide’s Uniting College and Flinders University.

In 2005 a week-long family visit to the Christian Medical College of Vellore in South India sparked another academic adventure. Deidre saw social workers implementing the community development models of Paulo Freire, a Brazilian educator who she knew worked alongside liberation theologians.

“I thought that’s a significant intersection with my work as a Christian educator.”

Deidre was soon enrolled in a Master of Social Work at Flinders University including 140 hours of professional placement.

“As a social worker, I heard their stories and responded to their suffering by inviting them into narratives of hope. As a Christian, I believe that this work is a vital expression of Christ’s compassionate ministry, especially in an area where Christian organisations have failed.”

Deidre was working as a counsellor three days a week when members of the South Australian Synod nominated her as Moderator-elect.

The confidence placed in Deidre as Moderator of the South Australian Synod was resoundingly shared by members of the 14th Assembly in 2015 who chose her as President-elect on the first ballot.

As is the case with all incoming Presidents of the Uniting Church in Australia, Deidre’s first task is to preside over the Assembly meeting.

The first tranche of reports and proposals for the 15th Assembly were released at the end of April and there are already several big conversations on the agenda.

Sovereignty for First Peoples in the Uniting Church, the church’s response to the Royal Commission into Child Sexual Abuse, a statement on domestic and family violence, how the church and its agencies respond to laws on voluntary assisted dying, and whether the church should celebrate same-gender marriages.

Beyond the 15th Assembly youth and young adults will definitely be a focus. During her time as South Australia Moderator, Deidre actively canvassed the views of young church members, their issues and struggles and what they thought their church should be doing in the public space.

“These young people are amazingly gifted and committed to shaping the church and to live their faith in the world around them.

“We can move courageously into the future, because we see the hope among us now.”