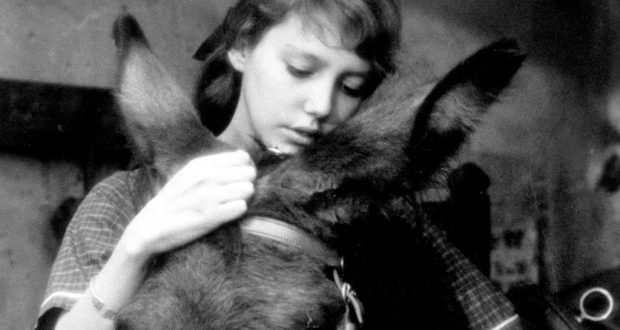 Noted for his austere formal style and unique approach to performance, French filmmaker Robert Bresson is globally celebrated as a master of the cinematic arts. He has inspired generations of filmmakers including Martin Scorsese, Andrei Tarkovsky, the Dardenne brothers and Lars von Trier, and renowned screenwriter Paul Schrader (Taxi Driver) stated he was the “most important spiritual artist living—a spiritual artist who has forged a style so singular it resists imitation”.

This spirituality courses through the veins of Bresson’s 13 feature filmography, perhaps most famously in Diary of a Country Priest, The Trial of Joan of Arc and Pickpocket, and this aspect of his work is critical to understanding and appreciating his acclaimed 1966 film Au Hasard Balthazar.

Boasting spectacular religious imagery and highly charged symbolism, Balthazar may be considered rather simple in terms of plot as it traces the tragic trajectory of a donkey in rural France, but the subtext is clear. French auteur Jean-Luc Godard once declared of Balthazar it was “the world in an hour and a half” and audiences today can still revel in its striking ability to mesmerise through exacting visuals and editing rhythms, while reflecting on its timeless messages of sacrifice and divinity.

It is no coincidence that Bresson would employ a donkey as the chief protagonist to underline the sense of spiritual importance central to the narrative. The animal carries a special resonance in the Christian faith, the very same creature cited as carrying Jesus for his triumphal journey into Jerusalem, and it will have seven masters, numerically significant for those who might connect such a number to the seven words from the cross or the seven deadly sins.

Balthazar’s journey is obviously a story of hardship and endurance with parallels to the life of Jesus, but Bresson was always careful to ensure that his tales were not just simplistic religious allegories. This is cinema that carries enormous spiritual messages that transcend any one particular faith and unite us all. The brutality and suffering enacted upon the donkey is a stark reminder of the inhumanity that is always lurking within us, and the psychological traps which perpetuate oppression from the dawn of humanity to the present day.

In an age where the silver screen seems drenched in blockbuster superheroes and gross-out comedies a film as graceful, groundbreaking and transcendental as Balthazar is mandatory viewing. A tale of hardship, a tale of sacrifice and ultimately a tale of deliverance, Au Hasard Balthazar is the “world in an hour and a half” and a message from the past for the future of the world.