Home > Features > From the kitchen to the pulpit 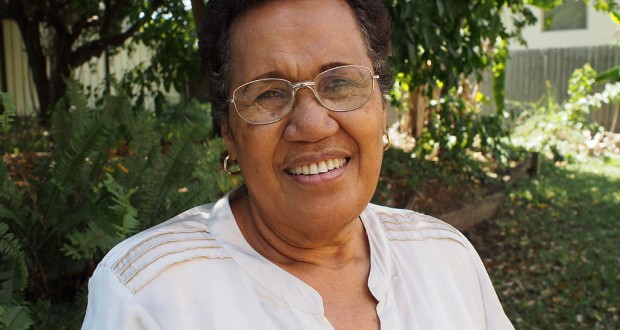 From the kitchen to the pulpit

Pacific Island women are challenging a culture which excludes them from leadership in church and society. Dianne Jensen talks to education advocate Lisa Meo.

Fijian-Australian Lisa Meo has been knocking on the doors of the male-dominated Pacific Island churches for a long time. The retired educator and academic has been a leading voice in challenging the theological and cultural institutions which have barred women from leadership and left them vulnerable to poverty and abuse.

She knows first-hand that many women living in traditional societies are uneducated, bear children too young and are unaware of their importance in society.

“Our task is to encourage and support them to go further—from the kitchen to the pulpit!” says Lisa, the former coordinator for women at the Pacific Theological College in Suva.

Her own background is impressive. Lisa is a founding member of the Weavers advocacy network, a pioneering women’s program of the South Pacific Association of Theological Schools, and holds postgraduate qualifications including Masters in both Christian Education and Theology.

Now living in Brisbane with her husband Rev Dr Jovili Meo, Lisa’s career has taken her from one end of the Pacific to another, and across the world—a long road for the young girl who had to move from her small island village to access secondary school.

Her path was at first fairly traditional.

“I went as far as grade 10 and joined a Fiji Methodist Bible School and graduated with a Certificate in Bible Studies. I spent four years as a Bible teacher and married my husband and started a family,” recalls Lisa.

The Meo family moved to the theological college in Suva to enable Jovili to study, and Lisa became involved with women’s programs. She was elected as president of the Methodist Women’s Fellowship in Fiji, one of the youngest to hold the position.

As she travelled across the towns and villages, listening to stories, Lisa began to see the way in which church structure and teaching colluded with traditional mores to exclude women from power. Was this a true reflection of the gospel values she had learned and taught?

“The work took me to different areas in Fiji and overseas, where I contributed to a number of ecumenical conferences. When my husband was appointed to different postings in the church as a theological educator, I began to be interested to further my own theological education,” says Lisa. “That interest took me to study for a Diploma in Theology organised by the Melbourne Divinity School in Australia.”

It was during a trip to Japan for a conference that Lisa realised that theology could be explored through her own cultural roots.

“I became enlightened to the fact that if the Japanese can make cars using their language, and the Russians can go to space using Russian, I also can learn theology by using my Fijian language rather than English. I learnt that understanding concepts and ideas can be achieved in
any language.”

Lisa was offered a six month diploma course at the Ecumenical Institute at Bossey in Geneva, and went on to complete her first Masters in the United States. When the family returned to Pacific Theological College in Suva, Jovili began lecturing (later becoming principal) and Lisa became coordinator for women.

With the World Council of Churches Decade of Churches in Solidarity with Women (1988 to 1998) underway, the timing was right to turn the spotlight on the systemic exclusion of women from leadership roles in the church. The Pacific Council of Churches—with the support of the Pacific Theological College and the South Pacific Association of Theological Schools—agreed to establish the Weavers group from churches across the region to provide a voice for women.

“The name [Weavers] was chosen because weaving is a craft well-known to all women in different islands of the Pacific,” says Lisa. “Its advocacy role is a way or a methodology of weaving our theology together from different aspects of life and also raising the question, ‘Where is God in women’s daily struggles, in women’s experiences of subordination and oppression?’ ”

Whether they come from a matrilineal or patrilineal society, Pacific Islander women have always existed within a servant culture, she adds. A feminist vision therefore needs to differentiate cultural practices–including those in the Bible–from the will of God.

“Early missionaries proclaimed the liberating power of the gospel of Jesus Christ to different islands of the Pacific, and that brought changes and elevated women’s status to some degree. Women’s education was encouraged by those missionaries, and most abusive practices against women were abolished and their lives transformed.

“However Pacific Island societies are relatively patriarchal, and this has been encouraged and strengthened through Christianity. Women are regarded as second class citizens and almost passive listeners to any decisions of the community.”

The path from the kitchen to the pulpit must be navigated via the communal principles which underpin Pacific Islander communities, adds Lisa.

“Feminist militant and aggressive approaches have negative connotations in the Pacific communities because it appears contrary to the Pacific way of dialogue … So, doing theology is reflecting about God’s reconciling love through Jesus Christ, which empowers as it destroys barriers between men and women, or the oppressor and the oppressed.”

The Weavers group focused on gaining access for women to theological education as a key step in changing the status quo.

“In most of the Pacific Islands churches, theological education was meant only for ordained ministry, meaning for males exclusively, and for that reason the laity and especially women were not included,” says Lisa.

Lisa began travelling to different areas of the Pacific and meeting with church leaders and theological school principals to convince them to open their doors to women.

“The job I was doing was not easy,” she recalls. “I trusted in the power of prayers and I knew that the Lord was with me. When I returned to Fiji, I told the committee that I never pray so much in my life like what I did in all the trips I covered. Some responded positively and a few responded negatively. From what I gathered recently, almost all member schools of the South Pacific Association of Theological Schools now have women students as well as lecturers, just a few left.”

The Meos moved to Australia in 2002 through the invitation of the Uniting Church to establish a Fijian ministry in Melbourne and to support Jovili’s health. They taught at the United Faculty of Theology for six years before spending five more years in Sydney lecturing at the Allan Walker College and supporting the Fijian church there.

Now in Brisbane, the Meos assist the Fijian Uniting Church in Annerley, Brisbane.

Lisa and Jovili returned to Fiji in March last year to attend the Pacific Theological College’s 50 year anniversary, where they saw the increasing numbers of younger and older female students attending the college.

“It was indeed a positive and an encouraging sign of growth to us,” says Lisa. “Thanks be to God who opens doors for women to be empowered through theological education.”