Home > Features > Give peace a chance 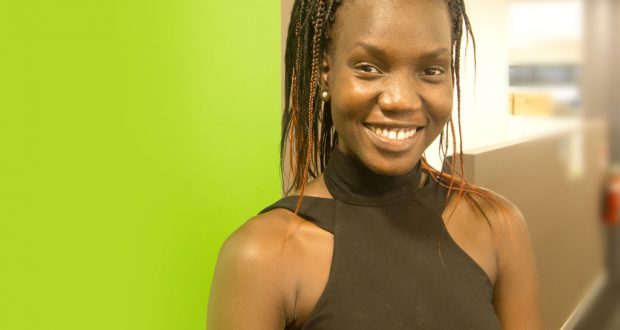 Nyaluak Leth talks to Dianne Jensen about the hopes and challenges facing the new generation of South Sudanese Christians growing up in Australia.

Nyaluak Leth remembers holding her father’s hand as they walked to the train station on their way to St David’s Uniting Church, Coopers Plains in Brisbane. The 19-year-old student was only five when she arrived from Egypt in 2003 with her parents and nine siblings after fleeing South Sudan.

“We didn’t have any mode of transport—my dad couldn’t drive, my mum couldn’t drive—so we would catch the train to church every Friday, Saturday and Sunday. My father took me to Girls Brigade on Friday, language classes on Saturday, and then Sunday we would have our worship services. Church was, and still is, my second home,” she recalls.

Nyaluak is a poet, fashion model, Griffith University student studying public relations and communications, and a youth leader at the South Sudanese Nuer Christian Faith Community based at St David’s. Her father, Pastor Moses Leth, is the church pastor.

She’s one of the new generation of Australian-educated teenagers from refugee backgrounds straddling the gap between western culture and the conservative values of their elders.

“I grew here but I know my roots are back in South Sudan. It’s like a plant—I was just plucked and planted here and I thrived and everything’s great here. I see myself as an Australian but I know and have seen all the trials and tribulations my parents had to go through … You have to be careful of what ground you are treading on sometimes,” she says.

“War, massacre and genocide of innocent women, children and men in South Sudan has had its toll not only for the people stuck in refugee camps. It’s also had an effect on the family members of those in camps and in the war zone who live here in Australia and elsewhere. The politicians of South Sudan have done more than let their people down—they have traumatised a whole generation.”

Growing up in a place where different cultures and nationalities co-exist has challenged the tribal loyalties which have fractured her homeland, says Nyaluak. But even more important is growing up in peace.

“Surviving has become living, which makes room for other things like education and dream-chasing, which have made the youth want to be a part of something more than just a member of a ‘tribe’—to be part of something bigger that uplifts humanity so tragedies like civil war no longer exist.”

Elephant in the room

Like many of her peers, Nyaluak is a natural communicator and digital native who is ready to speak out on confronting issues.

She has been writing and performing poetry ever since discovering Shakespeare in Year 11. At the Uniting Church 2016 National Young Adult Leaders Conference (NYALC) she read from another poet on the subject of domestic violence and religion.

“It’s the elephant in the room in South Sudanese communities—in our community we have had two people who have died within this one year because of domestic violence. It’s tragic and it’s happening to young women,” she says.

Earlier this year Nyaluak and a friend hosted a domestic violence fundraiser at the Goodna Salvation Army Centre.

“We were targeting mostly young men and women, those who have had a chance to grow up here in Australia and experience the culture, in hopes to emphasise the dangers and the mental, physical and emotional effects on the victim and those around them. The turnout was not as large as we had hoped, but the presence of the older members of the community meant a great deal to us.”

The closeness of the migrant community and its strong family networks mean that people are not encouraged to seek help from outside the community, she adds.

“Back home the church was the community; it was like a courthouse, church, community centre, everything … but coming here, where religion and culture are different things. It can really mess with your head!

“People need to understand the difference between culture and religion. You know that your religion says this is not right. But your culture says it’s okay—who you going to choose? I wanted them to have that thought—that it’s okay to choose.”

The model of her own parents showed Nyaluak that change was possible.

“My mum worked as a housewife for a long time until she decided—you know what, I’m trying to adapt into this culture, let me go get my licence, let me go find a job, because that’s how it works here. She realised that in this country women are able to have a sense of power, a sense of position in society and so she took that up and she began running the household.”

Her father’s response was inspiring. “It’s amazing to see the change, he’s always been a humble man but now that his wife is doing the running of the family he has learnt to have a high level of respect for her.”

Nyaluak was motivated by her experiences at NYALC to help her generation of South Sudanese Christians
re-connect with faith.

“There was like a massive divide between the elders and the kids, a gap of understanding and communication. I thought, let’s build that bridge, let’s do this! So I came back and I made a proposal to the pastor, my dad—I want to start a young group, can we do that? He said, ‘I’ve been waiting for you to ask!’ ”

The young people loved the idea of having their own social space and being able to talk about the real world challenges of growing up in Australia, says Nyaluak. The new group is called FIFTH (Freedom in faith, truth and harmony) and began in October.

“I want them to get that and digest that and to understand that God is your number one—but who are you to believe in God if you don’t believe in yourself?”