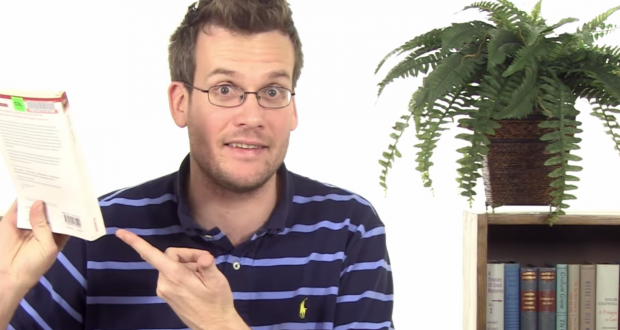 Following John Green’s inclusion in this year’s Time 100 and the adaptation of his latest novel into a blockbuster movie, Rohan Salmond talks to him about church, community, teenagers and the universe that wants to be noticed.

There are thousands of John Greens in the world, including lawyers, teachers, politicians and even a Bigfoot expert. But John Green the novelist from Indianapolis is truly unique and, according to Time magazine, one of the 100 most influential people in the world.

It is almost impossible to name all the projects to which John directs his considerable creative energy. He is best known for writing young adult fiction. His latest novel The Fault in Our Stars, has sat comfortably in the New York Times bestseller list for nearly two and a half years, and last month was adapted into a movie starring Shailene Woodley and Ansel Elgort.

But John’s ability to foster community through the internet and his thorough understanding of young people has also made him something of a digital mogul. Along with his brother Hank, with whom he runs the Vlogbrothers YouTube channel, John either co-owns or co-runs about a dozen internet-related projects, including VidCon, the largest online video convention in the world, and The Foundation to Decrease World Suck, a registered charity which raised nearly US$870 000 in a 48 hour digital fundraising drive last year.

The meaning of existence

Questions about the meaning of existence fascinate John, and it is a little-known fact that he is Episcopalian. Before writing his first novel Looking for Alaska, he intended to become a priest. He enrolled at the Chicago University Divinity School and spent five months as a chaplain at a children’s hospital, but ultimately switched to studying religion and literature at a liberal arts university.

John rarely talks theology on the internet because “I find a lot of the conversation about religion online really, really boring” but theological concepts pepper his books and videos, and he speaks fondly of the community he has in the Episcopal Church.

“One really interesting question to me is whether there is any meaning in human life and whether that meaning is constructed or derived: Do we make meaning, or should we discover the meaning that already exists?” asks John.

Given his multi-faith readers and viewers, John shirks strictly Christian theological language and opts for more secular, philosophical concepts to explore deep questions with his audience.

“We live in a very secular world but I worry that it doesn’t think a lot about that question [of meaning]. It’s busy fluttering about doing all the things that one does in one’s very busy life rather than pausing to reflect and engage.

mine. I sort of snuck myself in as him I guess. He believes that the universe wants to be noticed—it wants to be apprehended. I think a lot of the meaning we find in human lives is the pleasure and challenge observing and being aware of the astonishing beauty and diversity of the universe.”

John’s YouTube viewers—called “Nerdfighters”—number in the millions, and the vast majority of them are teenagers and young adults. Time even went so far as to call John a “teen whisperer”, but it is probably more accurate to call him a teen advocate. Young people are incredibly important to John, and not just because he makes things for them for a living.

“I find that teenagers are tremendously intellectually curious and thoughtfully engaged,” says John. “I think they are too often dismissed by adults because their ways of asking the big questions are different from the way we ask them.”

This may come as a surprise to those used to hearing stories about disengaged, cynical youth, but John’s enthusiasm for young people is infectious. He says teenagers shouldn’t be patronised; feeding them simplified messages is actually counterproductive.

“Ultimately I think in many cases teenagers are asking those big questions better than adults are asking them. They ask questions about the meaning of life and why suffering exists and what our responsibilities are to other people,” he enthuses.

“They ask those questions without irony … I find that tremendously appealing.”

There is no “them”

Despite his own brand of bookish charisma, John lives with anxiety and is an incorrigible introvert—his current star status is a challenge. But interacting with other people is an indispensible part of his worldview. John often talks about “imagining others complexly” which is a pivotal theme in a number of his books and videos.

“The Fault in Our Stars says that people living with serious disabilities are not ‘other’, they are people. Their lives are richly complex and full of hope and humour and anger and everything else that is the human life.

“Any time we imagine people as fundamentally other, we dehumanise them. We take away their personhood and I think that is one of the least generous, cruellest things you can do to someone. It is really important to me to try to use fiction as a way into others, a way into imagining others as fully human and also to use stories as a way of claiming the fullness of life.”

It is a profoundly empathetic application of the Golden Rule. John began to learn this philosophy through his family at first, but later via a much broader sense of community through church and the internet.

“That is a big part of the role that the church plays in my personal life,” says John. “One of the knocks on churches in the 21st century is that they are antiquated—we don’t need them the way that we used to; they don’t serve the social or political functions that they used to. But for me church has always been a place where I am not only free from judgement but where I am asked to turn outward.

“It is so hard to be pulled out of yourself and think about other people. I will take that anywhere I can get it.”

There are things churches can learn from the way digital communities grow and organise themselves. They are, after all “not that different”, says John.

“They are both communities.” In John’s experience, growth is a by-product of authentic, inclusive community.

“If we focus all of our resources on trying to get people to come to church I think that we miss out on the tremendous opportunity of trying to do the actual work that we have been called to do.

“Hank and my strategy or tactic with [our videos] has always been to try to talk about stuff we care about with people we care about and to assume that as long as we are talking openly and authentically with our audience, we will have the right audience.

“We may not have the largest audience, but we will have the audience that we want.”

John’s website is johngreenbooks.com
The videos he makes with his brother Hank can be found at youtube.com/vlogbrothers

Mission Control: a pioneering spirit in the church