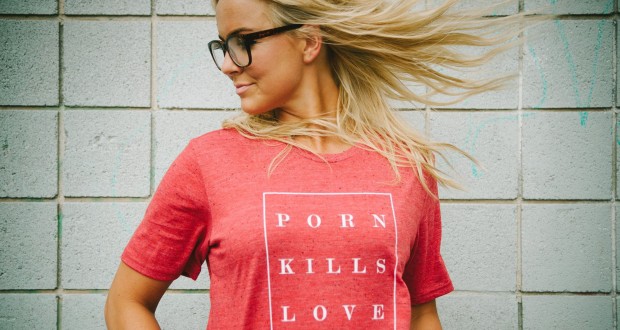 Experts confirm that hardcore pornography is the biggest source of information about sex for young people. Ashley Thompson explores how its entrenchment in mainstream society has warped sexual expectations—leaking lies into the hearts and minds of our youth.

It’s not like you have to go looking for pornography, today it comes looking for you. In 2011, the University of New Hampshire’s article Trends in Youth Internet Victimization cross-analysed three youth internet safety surveys to reveal 23 per cent of minors had experienced unwanted exposure to pornography.

Australian author and women’s advocate, Melinda Tankard-Reist told ABC News, “I go to schools where 12 and 13-year-olds will show me on their mobile phones the number of requests they’ve had that day for sexual images [from] boys.”

Meanwhile the sexualisation and objectification of females has reached beyond the hardcore and into mainstream media; evident most strongly in the easily accessible Fifty Shades of Grey and Zoo Weekly—which can be bought on the supermarket shelf, and softly by TLC’s Toddlers and Tiaras and the hyper-sexualised transformation of post-Disney icons such as Miley Cyrus, Lindsay Lohan and Hilary Duff.

Melinda says people of faith often question why she writes and speaks about pornography.

“To me the mystery isn’t that I’m doing it, it’s that more aren’t—and I don’t think we’ve fully understood or comprehended just how radical Jesus’ responses to women were [in his] time.”

“My colleagues and I do think that much of pornography constitutes harmful speech and incites violence against women and girls—and that any ethical society should restrict that content,” she says.

The 2012 Let’s Talk About Sex survey, conducted by the Australian Youth Affairs Coalition and Youth Empowerment Against HIV/AIDS, reveals 64 per cent of young people rely on pornography to learn about sex.

And the evidence mounting about the normalisation of violence in sex has become increasingly diabolical according to Wosnitzer and Bridges’ 2007 content analysis on Aggression and Sexual Behaviour in Best-Selling Pornography.

The study revealed that in the 50 of the best-selling adult videos, across all scenes, 48 per cent contained verbal aggression while more than 88 showed physical aggression. The analysis details that 94 per cent of the aggressive acts were committed against women.

One thing is clear—both soft and hardcore pornography is harming young minds.

But the church’s ability to speak out on issues of sex has been weakened by the Royal Commission into Institutional Child Sexual Abuse says Graham Leo—author, educator and member of NewLife Uniting Church on the Gold Coast. Graham is a longtime supporter of Melinda and Collective Shout.

“Unfortunately, the church has lost much of its moral voice in the public space. We failed to protect young people in our care for so long, and when we were found out, we vacillated and ducked for cover,” he says.

“Now we are paying a very heavy price—and I don’t mean in fair compensation to victims. I mean that we have lost the high moral ground from which we were once able to speak.”

Yet Queensland Synod moderator, Rev David Baker believes the loss of this “high moral ground” is not necessarily a bad thing, “if it helps us speak with a greater degree of humility and causes us to address the issues in a way that’s intelligible.”

“Certainly the issues around the Royal Commission should humble us but the issues around pornography and the commercialisation—the commodification of human beings, we should still be addressing clearly and openly,” says David.

However, before that can happen Graham Leo believes the church needs to “grovel in apology to the community for our failure to protect children”.

“Until we find the moral courage to make those apologies, we will have to do the best we can, trying to find a place to stand on other matters such as pornography which are desperately in need of Christian principles being applied with intelligence, compassion and holy indignation.”

“If a boy grows up in a household where the mother and sisters and other women are treated and spoken about with dignity and respect, schools will barely have to mention the topic,” says Graham.

“Any parent who lets their under-18 child use a web-enabled device in the privacy of their own bedroom without frequent, random checks on content and usage is either an idiot or irresponsible. Or both.”

Taking the wider fight, Melinda Tankard-Reist says, “It takes a village to raise a child and we need help. It’s too hard on our own. I’ve got four children and I think how hard it is myself—and how parents are often used as scapegoats for the lack of government action.”

“We’ve got to continually critique the commodification, the objectification of human people and of relationships,” says David.

Join the fight for a world free of sexploitation on collectiveshout.org. For more information visit melindatankardreist.com and grahamleo.com