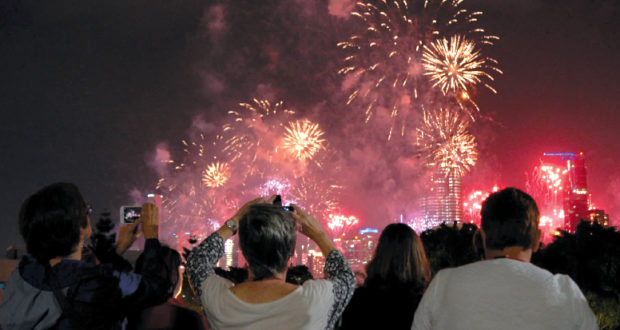 With more than 300 women from across Australia in attendance, UnitingWomen 2018 was an opportunity to weave stories of wisdom and wonder. James O’Callaghan reports.

From the opening words of welcome to the closing communion service, the theme of sharing stories about the interweaving of faith and life ran through the third UnitingWomen conference in Brisbane at the end of September.

In tune with the spectacular Saturday night Riverfire fireworks marking the end of the Brisbane Festival, there was plenty of excitement and inspiration.

Over the four days of structured and casual conversations, keynote speakers, workshops and forums, the more than 300 women of all ages and ethnicities shared their wisdom and formed new connections at the Somerville House Girls School venue.

The event was hosted by the Queensland Synod and supported by Somerville House, opening with a Welcome to Country by Baringa Kukoyi followed by an address from the Hon Di Farmer, Queensland Minister for Child Safety, Youth and Women, and Minister for the Prevention of Domestic and Family Violence.

After the initial formalities, President-elect of the Uniting Church in Australia Rev Sharon Hollis took to the stage.

Sharon summarised UnitingWomen as letting women see the humanity in each other—in our vulnerability, our strength, our laughter, our tears and our joy—and the image of God in that humanity.

Run the race set before you

On the second day keynote speakers athlete Eloise Wellings and artist Lyn Diefenbach inspired listeners with their stories highlighting the power of faith in times of adversity.

Distance runner Eloise said that her eyes had been set on becoming an Olympian from a young age.

After being selected for the Sydney Olympics in 2000, Eloise suffered a stress fracture, the first of many, putting her dream on hold. It was at this low point that she went to church with a friend and heard the Gospel in a new and powerful way.

“God was saying to me, ‘Eloise, because of me you are enough’.”

Eloise is a founding Director of the Love Mercy Foundation in Uganda, established in 2009 after she met Ugandan dual Olympian Julius Achon, a former child soldier.

When brokenness is made whole

Equally inspiring was Lyn Diefenbach’s keynote address which invited listeners to explore the joyful and painful memories which make up our lives. And in doing so, to recognise that God can weave our brokenness into wholeness.

The acclaimed artist spoke of the devastation caused by the tragic death of a granddaughter. Lyn created an artwork on stage as she spoke, underlining the link between art and spirituality.

“God is good. God comes alongside of us in our hurts and he carries us on the wings of the prayers of others, their presence, their actions, so we can become stretcher bearers for others who have walked a similar path,” she said.

“We can pick up the broken because we have been broken ourselves.”

The workshops on the second afternoon provided a range of activities and discussions, including a simulation activity by Sureka Goringe and Mardi Lumsden from UnitingWorld and a session on bellringing by conference co-coordinator Rev Yvonne McRostie.

An impromptu performance of a song in the Meriam language following the “Singing our past and future” session facilitated by performing artist Ruth Ghee, was an extra highlight.

Seini Brooks and Akesa Racava from the Kangaroo Point Uniting Church, Brisbane enjoyed the weaving workshop and the connection to their heritage.

“We come from a background where they do weaving, and that workshop takes me home thinking of my mum weaving mats for the house, for gifts and to supplement my father’s income,” said Akesa, who is the Chairperson of the Queensland Synod Multicultural Reference Group.

She promoted UnitingWomen at the recent World Federation of Methodist and Uniting Church Women South Pacific Conference, which resulted in two women from Fiji attending.

The second evening concluded with a Tongan feast hosted by Park Church Tongan Congregation. The event was a fundraiser for UnitingWorld, with proceeds going towards relief in Tonga following the significant damage caused by Tropical Cyclone Gita earlier this year.

The first of two panel sessions on Saturday highlighted how UnitingWorld is making a difference in the Pacific region through programs like Partnering Women for Change. This initiative raises awareness of domestic violence within the predominantly Christian Pacific culture, responding to alarming statistics which indicate that 68 per cent of women and girls experience violence in their homes and community.

The second panel focused on women in leadership, with senior Uniting Church figures taking the stage for a session moderated by the General Secretary of the Queensland Synod, Rev Heather den Houting.

President-elect Rev Sharon Hollis said that the church in Australia must come to terms with the fact that it is no longer the centre of the universe.

“I say that’s fantastic, because we can be true to our call which is to be salt and light and mustard seed and yeast, all of those fabulous images of God taking the small things and doing something with them,” said Sharon.

Joining Indigenous women on the journey

“It is up to women today to play a key role
in weaving a new tapestry for Australia. The Australia that I dream of, built on truth, justice, love and hope,” said Brooke, who shared her presentation with community leader and mentor Aunty Jean Phillips.

Aunty Jean encouraged those in attendance to join Indigenous Christians on their journey.

“So, I trust that you take up the challenge to walk together, to build a better nation for everyone and we can do that, and God can bless us, and we will see real blessing, we will see real reconciliation.”

Conference attendees from the Northern Territory included women from Winnellie and Parap in Darwin and Nhulunbuy.

Elizabeth Gurimangu, Women’s Ministry Coordinator for Arnhem Land at the Northern Regional Council of Congress, has attended all three UnitingWomen conferences in Sydney, Adelaide and Brisbane.

“It was very empowering, inspiring us that through the love of Christ we can take our message to these brothers and sisters that we have never met.”

Elizabeth described some of the issues in Arnhem Land affecting Indigenous people, and her own role as a grandmother in supporting the community.

“I’m living in Darwin so I am there for my children. I support them by taking the grandchildren to school. One of my granddaughters will be graduating this year, and then moving to university with a scholarship for more studies. I support not only my grandchildren, but other children too; I love them, I love my people.

“My message to the church: Please brothers and sisters within the body of the Uniting Church, we need the wider church to support us through prayer, by the help of the Holy Spirit.”

Dr Deidre Palmer delivered the sermon at the closing service, focusing on two key women in the Bible, Joanna and Mary Magdalene.

“These wise wonderful women in the scriptures are our sisters of faith,” said Deidre.

“Our lives are woven together with theirs, as we hear again the good news declared in the gospel.”

In her parting message, Deidre encouraged women to find their voices to share the story of Christ and the wisdom of God.

“So that the world may be invited into the wonder of the deep power of God, bringing reconciliation and hope to the whole of God’s creation.”

As the conference drew to a close, organisers introduced Moderator of the Northern Synod Rev Thresi Mauboy Wohangara and the team who will host the conference in Darwin at the Club Tropical Resort in July 2020.