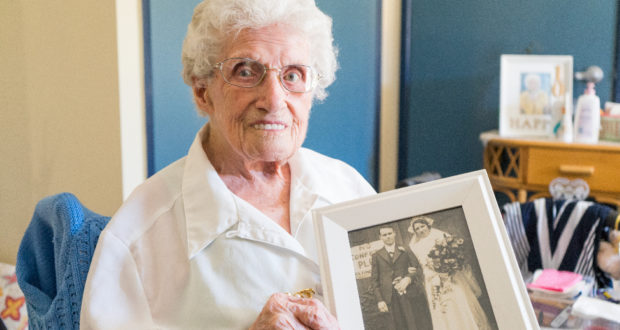 Tea roses in her wedding bouquet, washing and curling her hair in rags on Saturday night, and going to the Methodist Temperance Hall on Sundays. Gertrude (Gertie) Booth, who will turn 107 on 14 June, has clear memories from times long gone. Dianne Jensen reports.

The diminutive and chatty Gertie Booth, born in 1911, attends Elanora Uniting Church on the Gold Coast and is a resident at Blue Care Elanora Pineshaven Aged Care Facility—and a keen follower of the Geelong Football Club.

Her soft voice carries a Yorkshire lilt as she recollects a generation whose lives were moulded by hard work, two world wars and the Great Depression.

“We used to play in the street, double storys [houses], and there were cobble stones and that’s all we had to play on,” says Gertie.

“When I left school at 14, I went into tailoring, and from there I went into dressmaking—finishing the dresses. [There was] lots of fabric! The skirts went right around the floor, it took ages to do the hem!”

The sudden death of Gertie’s mother left her older sister in charge, responsible for the physically demanding chores of caring for a large family.

“Women worked hard … we used to [store] the bath down in the cellar with the coal and every Friday night we all had to have a bath … up and down … filling the bath and emptying it!”

Gertie married in 1938; a year later, war broke out and her husband served overseas for four years. Gertie became a fire warden.

“I remember going outside at night time, seeing everybody’s windows were all blacked out, no lights showing and then you could hear the planes coming across. When the daylight come we could see the pieces of shrapnel on the ground.”

After the war, like many Britons, they moved to Australia in the 1950s through the Assisted Passage Migration Scheme, the so-called “£10 poms”.

“We were sick of being down there in the war, so we all got together and packed up, with my two brothers, and decided to come out here to my father [who was living] in Sydney,” says Gertie.

Gertie and her husband lived in Sydney, Melbourne and regional Victoria before she moved to Queensland after his death.
Like many of her generation, Gertie is perplexed by contemporary introspection about life and faith. As her long life unfolded—with tragedies, disappointments and joys—she will only say that it was often difficult—“we all survived, but it were very hard”.