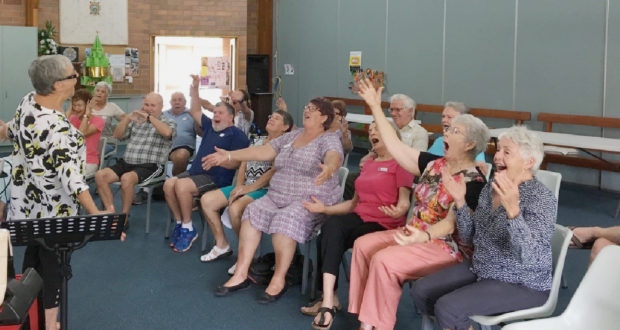 St Andrew’s, Yeppoon uses the power of song to bring joy to people living with life-limiting conditions such as dementia and Parkinson’s disease. Dianne Jensen reports.

The familiar music cuts through the fog of dementia, nudging at long-lost memories. For the first time in many years, the elderly man slipped his arms around his wife and they began to dance.

Such precious moments of connection are part of the ministry of the Sing 4 Health memory café at St Andrew’s, Yeppoon, a Capricorn Coast Uniting Church congregation. Rev Suzy Sitton, Jan Boyd of the Capricorn Coast Catholic Parish and church volunteers run the Thursday morning community group for people living with dementia, Parkinson’s disease and other life-limiting conditions and their carers.

“The café helps people with their general well-being and is providing quality of life, respite for carers and a place of belonging. We gather, we sing and we have morning tea. God is doing something new,” says Suzy.

The church first discussed ministering through song to people with dementia and their carers in 2015, but it wasn’t until congregation member Laurel Hunt was approached last year by Jan about using music therapy for people living with Parkinson’s disease that the idea got off the ground.

“We are now calling it ‘sing for health’ because we’ve invited anybody who would like to come along and have fun, because music can be helpful to anyone,” says Laurel.

“We had a man, Ron, who used to play the guitar but he hadn’t for a long time because he had lost the art of coordination. A young man was playing guitar and Ron gradually drifted over and the young man offered him the guitar. Ron sat there with it on his lap looking at it, and then suddenly he started playing—it all came back to him!”

For many, the joy of singing toe-tapping melodies along with vocal exercises, the occasional conga line and a friendly smile is the best medicine.
“When you have that live engagement, where you can look into a person’s eyes and there’s a response—that is the difference,” says Suzy. “That’s what is giving people that sense of wellbeing and that sense of ‘I am still a person’—a person loved by God and loved by us.”

Suzy uses the same model of familiar songs during a simple worship service at Blue Care Capricorn Gardens Aged Care Facility where she is chaplain.

“People with dementia lose connection with family—even though their families are right there—and to be able to provide something and for family to witness it brings such joy for that small moment—there’s my loved one, the one I know,” she says.