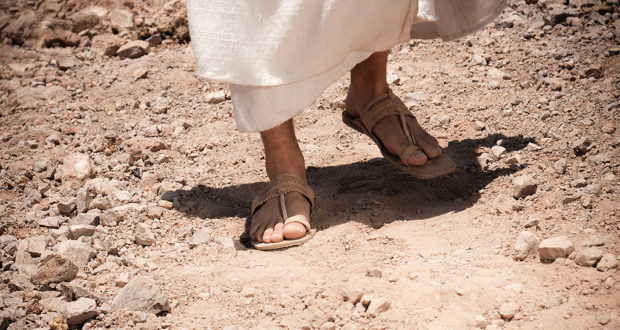 The number 40 is mentioned in Holy Scripture over 100 times and its use seems to have less to do with an actual number and more to do with signalling a time of completion and fulfilment, or trial and testing.

The following seven stories from the Old and New Testaments where the number 40 is prominent illustrate ways in which we can look at the power and wonder of God’s enduring love and allow us to question our own faithfulness and participation in God’s mission in the world.

There are stories that come to us from the witness of scripture that are filled with what Biblical scholar Amos Wilder refers to as a “surplus of meaning”. The story of the Great Flood in Genesis 6-9 is one such story. In this story we read that the earth would pay a severe price due to the wickedness of humankind. It rained for 40 days and 40 nights, or in other words, it rained until the time for it to rain had come to an end. It rained enough so that every living thing on earth was destroyed.

This is a harsh tale. It declares in the strongest way possible that sin is a costly thing and reminds us that there are consequences to living in this world as though we will never be held to account.

There are consequences to greed and violence and prejudice and exploitation. The story of the great flood may be an embarrassment to some—some sort of left-over fairy-tale from a world gone-by when the great big stick of God’s judgement needed to wielded in order to get people to behave.

But surely this story has never been more pertinent? As we enter into a new geological age, the age of the Anthropocene (the first time in the geological history of our planet when a biological species is actually affecting global conditions such as climate) this story has ceased to become some sort of fable. This story is a real-time reflection of the living conditions faced by our sisters and brothers in the Torres Strait Islands and parts of the Pacific such as Kiribati and Tuvalu. The consequences of humankind’s greed and rampant consumption, of our disrespect for the environment, of our disobedience in being good stewards of God’s good creation, have resulted in sea-levels rising and entire nations being put at risk …

In Exodus 34 we read that Moses remained on Mount Sinai for 40 days and 40 nights as he received instruction from God. As the narrative unfolds we learn that these instructions would provide the basis of what became known as the Law—the primary resource for social, legal, ethical and liturgical practice for the people of Israel. The Law was originally set in stone (literally!), and so as time and context changed for the people of Israel, these instructions needed to be interpreted in order to provide proper guidance and the assurance of God’s favour.

The Uniting Church has always prided itself on its scholarly work. The Basis of Union reminds us that the church will never be without faithful and scholarly interpreters of scripture. But where are they? How is the church equipping itself in the scholarly pursuit of scripture and theology? Dr Janice McRandal gave a presentation at the 2016 Synod in Session that lamented the lack of Uniting Church scholars—teachers trained and formed with a Uniting Church academic context.

At present the overwhelming majority of our theological teachers and lecturers earn their doctorates overseas which means we are not investing in our own capacity for higher education and training, and we are also not allowing our own learning and experience to help shape and form those who would seek to interpret God’s instruction for the church.

Has the Uniting Church lost confidence in its own capacity for teaching and learning?

Have we self-selected the voices we will listen to, in order to hear what we want to hear, and be affirmed in what we already think we know?

Israelites in the desert

In the book of Exodus we read the story of the Israelite people wandering in the desert for 40 years. You probably know the story: After being delivered from slavery, the Israelites flee into the desert with such hope and joy and yet it doesn’t seem too long before they begin to complain to God, and are disobedient to God’s commands. It seems they are punished for their lack of faith.

But I wonder if perhaps an underlying truth to this narrative is that it takes a generation or two to learn new ways of being. The Israelite people were no longer slaves in Egypt—they had left behind their years of captivity to Pharaoh. And yet when slavery is all you have known—it is not so easy to give up.

Some of you may be familiar with the work of Mike Frost and the Missional movement. At its core this movement is a creative formulation of the work of Karl Barth and David Bosch around the idea of Missio Dei, the mission of God. There is good work here, Mike Frost is the vice principal of Morling College in Sydney and has done much to encourage church planting and creative mission round the globe.

One of his most influential books is called Exiles. It looks at the narrative of the people of God in exile in Babylon as a way of understanding the contemporary context of the church and the loss of Christendom. It is a strong analogy. The church may be in exile, we may have lost the privileges we once knew when we lived in the Promised Land but God is faithful, we are entering a new season…

Leaving Christendom has not meant leaving behind the privileges of the Promised Land—instead we are leaving behind slavery in Egypt. Perhaps rather than thinking of Christendom as a gift to the church, it is more illuminating to think of it as a time of captivity and enslavement.

Has the church been held captive to the privileges of wealth and power? Has it forgotten where it began among the broken and the marginalized? Does the desert gift us with a time of forgetting the misplaced privileges of the past, in order to remember who we are truly called to be—a people who bring good news to the poor?

There are exciting possibilities before us …

Elijah hiding in a cave

In 1 Kings 19 we read the story of the prophet Elijah who flees to Mount Horeb as the evil queen Jezebel plots against him. Elijah fasts for 40 days and 40 nights as his journey brings him to a cave in the side of the mountain. The Word of the Lord comes to Elijah, and he is told to stand on the mountain as the presence of God passes by.

It’s pretty hard to hear silence now-a-days. With the pervasive presence of social media all around us, it is near impossible to drown out the many voices vying for our attention.

Are we as a church hiding in a cave waiting for a still-small-voice? Have we lost our courage or have we lost the privilege of being heard?

Learning from the Ninevites

In the story of Jonah, we read that the Ninevites were a wicked people. And so God sends the prophet Jonah to tell them to repent. But as it turns out, Jonah doesn’t like the Ninevites, and so he does a bit of a runner.

Jonah’s great fear is that the Ninevites will listen to God’s word and repent from their wickedness and by doing so forgo the punishment for their sins. And we know how the story goes: Jonah sets sail in the opposite direction, but is caught in a storm and the crew of the ship in which he is travelling throw him overboard in a last ditch attempt to appease the angry gods. But of course this is just the beginning of Jonah’s woes, for he is then swallowed by a huge fish and remains in the belly of this creature for three days. Eventually Jonah is vomited up onto the shore and God reminds him of his original mission.

And so Jonah walks through the city of the Ninevites and tells the people to turn to God. And they do: for 40 days and 40 nights they pray and fast and seek God’s mercy.

What if the church were to place itself within this story? Are we the prophet who refuses to do what he is told? Have we been fleeing God’s command because we don’t like our instructions? Or are we simply the people of Ninevah, hearing God’s word of judgement upon us?

Jesus in the desert

The New Testament also has its fair share of number 40 stories. In Mark 1 we find Jesus himself in the wilderness for 40 days and nights. According to the story, Jesus is there to face temptation. And it is the Holy Spirit who has sent him. The Greek word for this act of sending is a derivation of ekballow, the word used for exorcism. It literally means to “throw out”.

It was also used to describe the act of a farmer driving a team of oxen. Jesus has been driven into the desert in no uncertain terms. The desert is where God wants him to be.

Temptation is something we have all faced; it’s something the church constantly faces.

Temptation abounds: to be something that we’re not, to be popular, relevant, nostalgic, conformist, nice and reasonable…

The North American theologian Stanley Hauerwas has much to say about the insidiousness of the temptations facing the contemporary church. The church’s acquiescence to the insidiousness of liberal democracy’s temptation of reasonableness has meant that we have lost our way. Hauerwas says that the church has been seduced into thinking that it is some sort of moral agent of the state and the great danger is that we end up being owned by the state.

There is no longer a divide between church and world, and the prophetic voice of the church ends up being drowned out by a cacophony of mutual thanksgiving and self-accolade.

Stanley Hauerwas says that if the church is called to love our enemies—then it is about time we made some. Jesus was not crucified for being nice.

In Matthew 28:17 we read that after 40 days the resurrected Christ guided the discipleship community to the mountaintop where he made his ascension and they worshipped him. But some doubted.

This “doubting” is so enlightening: what are these people actually doubting I wonder? Jesus has just been risen from the dead for goodness sake, what more does he need to do? Perhaps this story is reminding us that doubt will always be a part of our faithful living. Our church will always have its doubters and that’s ok. Perhaps faith and doubt are not enemies but rather two sides of the same coin. Jesus says that we only need faith the size of a mustard seed. Surely some of us can manage that. And for the rest of us: perhaps the story is that at least we need to show up!

Is there room for doubters in the Uniting Church and if so, what are we doubting?