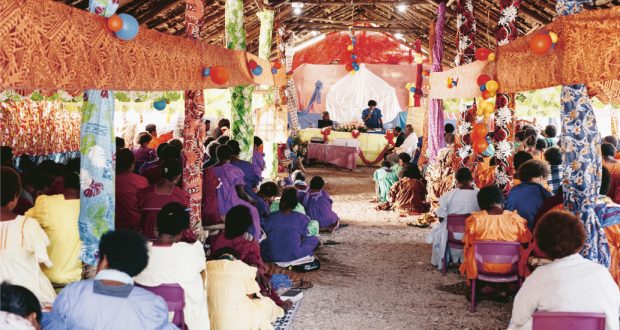 In some of the least equal societies in the world, Pacific women are being given opportunities to lead with the support of partnerships between Pacific and Australian Uniting Churches. Photo: Market Lane Media

While great strides have been made to address the global issue of gender inequality and gender-based violence, there is still much progress to be made, particularly in some Pacific nations where domestic violence, sexual assault and discrimination is rife. Cath Taylor reports on the issue and how the Uniting Church is helping Pacific churches to empower women and make change in their communities.

Crouched in the undergrowth with her arms wrapped around her head, 12-year-old Mary is hiding. This is where she hears the voice of God for the very first time.

“I prayed to God,” Mary remembers. “And that was the very first time I felt him near. Very close. But it was not the last. God has been near me ever since.”

Mary is one of Vanuatu’s first female pastors, an emerging treasure in a culture where men are leaders and women the silent followers. From a difficult childhood, she relies on a strong sense of call forged during her early years as the only girl from her village to go to high school, and nurtured as the sole female at her theological college.

“My father, who was running for government, was not really comfortable with my training,” Mary recalls. “He told me not to go—the people did not want women preachers or teachers in the church. It is not in our culture. But I said, “No Dad. This is my Christian faith. If the young men can do it, why can’t I?”

And she did. It cost her dearly—the whispers of a community who disapproved, the loyalty of a husband who spent more and more time away from home and eventually took another wife. But Mary’s determination was formidable.

“As I studied more and more from the Bible, I began to ask questions of the village chiefs. Why are women always treated so badly? Why should they suffer so much?” Mary recalls. “In the community, in the church and in the government, we have an important role to play. And men? Do not criticise us! We can share the responsibility of leadership together!”

Mary is one of many women who are stepping up to lead across the Pacific, one of the most difficult places in the world to be a woman. Rates of domestic violence, as in Australia, are high. But in places like the Solomon Islands, Papua New Guinea and Vanuatu, change is desperately slow. In some of these countries, two in every three women and girls will experience assault or rape—many at the hands of family members.

Pacific Christians have become determined to help accelerate the pace of change. True, the church has been complicit in propping up attitudes that allowed men to dominate Pacific culture for hundreds of years. This generation, though, is hungry to redeem family relationships in communities where inequality and violence are rife.

The Uniting Church in Australia is passionate about seeing our sisters step into the light.

Using resources developed in partnership with Pacific theologians and UnitingWorld, Jesus’ life-giving witness about the equality of men and women is being taught in workshops and colleges across the Pacific.

In Vanuatu, as elsewhere, the key to creating more opportunities for women is winning over leadership in church and government as well as among the people. Pastor Nipi, a senior leader in the church, took part in one of UnitingWorld’s partnership workshops with the Presbyterian Church of Vanuatu.

“At first I thought what is this ‘gender balance’ they are talking about?” he says. “We never believed men and women could be equal. But as I made my Bible studies and we talked, I realised there is something there for me to learn. It has infected me! I like it!”

Nipi now prepares gender equality resources for all areas of the Presbyterian Church and works with people in remote and rural areas, reporting that the material is met with astonishment. “I cannot tell you what a change this is for us!” he says.

In partnership with UnitingWorld, Pacific churches have already run several television commercials condemning violence against women. Workshops in Papua New Guinea, Kiribati and the Solomon Islands are enlivening students, pastors and lay people with news of equality and all that it offers to families and for leadership. Most especially, change led by the church is allowing Mary and her friends to exercise their gifts for good.

“When we face challenges, we build our faith, we grow mature,” says Mary. “I want to tell the women: stand up. We can do it. We all have the potential to stand and preach God’s gospel.”

This month, UnitingWorld’s focus is raising awareness about and funds for the life changing work of our brother and sisters in the Pacific, ending violence and inequality. Within Queensland, fabulous support from congregations including Ashgrove West, Middle Ridge and St Stephens’, Redcliffe, St Andrews’, North Rockhampton, Cleveland Uniting and many, many more have encouraged us greatly. Thank you!