Home > 33rd Synod > Clean, clear and purposeful for the future 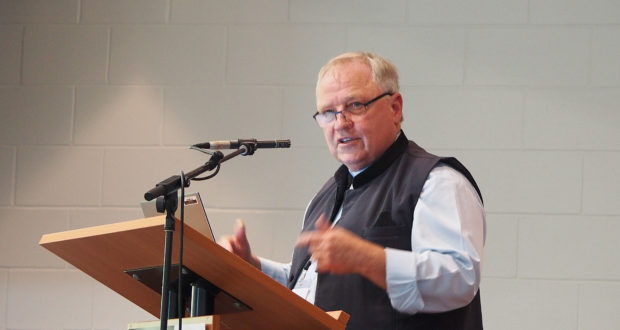 Moderator Rev David Baker began his report to the 33rd Synod with an affirmation of the collaborative relationship between the Synod office and presbyteries, which David called a “powerhouse” which will bear fruit in the years ahead as the teams cross-fertilise ideas and support each other.

He also highlighted the multicultural dimension of the life of the church which he described as “tremendously inspiring” and “maturing so well”.

David outlined the period of profound and great change that UnitingCare Queensland has gone through, but said their work continued to provide inspiration.

“My participation on that board [UnitingCare Queensland] has just deepened my appreciation of the commitment of the board and the executive to the mission of the church to which we commission them.”

David spoke of his travels with UnitingCare Queensland’s Director of Mission team as he hit the road for four days with Rev Peter Armstrong journeying from Brisbane to Charleville and Cunnamulla and back.

In terms of interfaith and ecumenical relations, David reiterated the need for the church to engage at grassroots to reduce the fear and anxiety within Australian society.

“The best thing we can do about it is invite someone of another faith to come and have a cup of tea with us and share stories. We’ve got to mitigate this level of anxiety that has been generated in this land and we as a church have a strategic place to do something about that.”

David mentioned his work with the Assembly and other Synod moderators to write to Immigration Minister Peter Dutton to condemn the harsh treatment of asylum seekers by the Federal Government. President of the Uniting Church Stuart McMillan informed the room that the only response they got from the Minister was a routine “thanks for your letter” which drew laughs from the audience.

David spoke of the journey the church has been on as a response to the Royal Commission into Institutional Responses to Child Sexual Abuse and used his own experience as a youth group leader navigating the forms and processes associated with ensuring a safe space for young people.

“All that stuff, which I know is at times frustrating, I’m doing too. It is important. It has changed my thinking … it has helped me in my leadership at that granular level so I encourage you to keep on that journey.”

David emphasised the privilege for the church—and himself—to be asked to provide apologies to survivors of child sexual abuse.

“Not all of the survivors who go through the Redress Scheme do it, but for some of them who we are is of such importance to them that they want an apology from us.

“It is a grace that is extended to us, that opportunity,” he said.