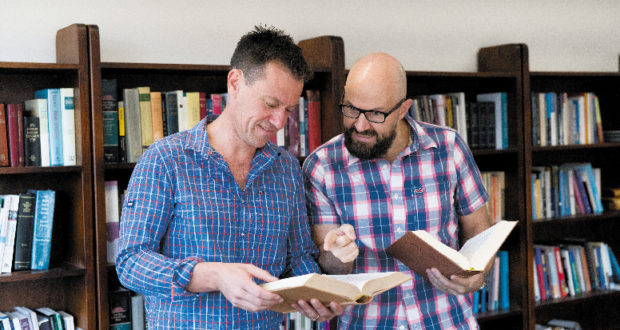 A new podcast series from Trinity College Queensland will take on the Bible’s most controversial elements to help Christians better understand how a sacred book can contain such problematic material. Ben Rogers reports.

Sex, violence, slavery, genocide … no, we’re not talking about the latest hit series on HBO or Netflix but rather the “Good Book”.

For many Christians such content proves challenging, even confronting, and such tough topics will be the basis for a new series of Principal’s Hour podcasts called Preaching Tough Texts from Trinity College Queensland (TCQ) in 2019. The series aims to equip listeners with ways to understand the Bible’s more outré passages and make sense of them in an age of #metoo where the patriarchy is frowned upon, the church fiercely opposes slavery and our legal system prohibits an “eye for an eye”.

Trinity’s previous podcasts exploring the books of Ephesians and 1 Samuel have attracted listeners from around Australia and abroad. TCQ Principal Dr Leigh Trevaskis says diving into the passages which pose deep dilemmas for modern Christians was a no-brainer for a theological college whose mantra is “Honest answers to tough questions”.

“We thought we should equip people to preach from biblical texts that our society may find offensive,” says Leigh. “We want to model how to preach from these texts in a way that acknowledges the difficulties without undermining a commitment to God’s holiness and righteousness.”

Leigh cites the example of the “Pretty Woman Law” in Deuteronomy 21:11 as the type of biblical material the podcasts will explore.

“The so-called ‘Pretty Woman Law’ would seem to legislate for the rape of an ‘attractive woman’ taken captive in battle. How do we read this as Christian scripture in a way that both affirms God as just, but despises the treatment of this woman?”

Other texts under the microscope in Preaching Tough Texts will examine the Bible’s passages on genocide and the apparent spiritual shortcomings of various people.

TCQ Old Testament Lecturer Dr Paul Jones, one of the speakers, sees the series as a critical bridge between biblical times and now.

“I would hope that students gain insight into how our ancient scriptures make sense of Christian living today,” says Paul. “Biblical books are historical artefacts, sure, but they also contain God’s living word, which still speaks today.

“We sometimes forget how ancient these documents are! They come from a world far, far away and yet we somehow expect them to read easily, perhaps because we’re reading from our nice, freshly translated Bibles.”

While TCQ students will gain maximum benefit from the podcasts, Leigh says that the series will be valuable for those in the wider church community.

“We podcast these talks so that lay people and church leaders can benefit from hearing the faculty preach through books of the Bible. Listeners should feel as though they’ve heard the preacher attend and grapple with the Bible in a way that makes it understandable and applicable in a modern context.”

Preaching Tough Texts will be available on Soundcloud and iTunes Podcasts from early 2019. Visit trinity.qld.edu.au/podcasts or search for “Trinity College Queensland” on the iTunes Podcasts app.