Home > Queensland Synod News > All in together for the common good 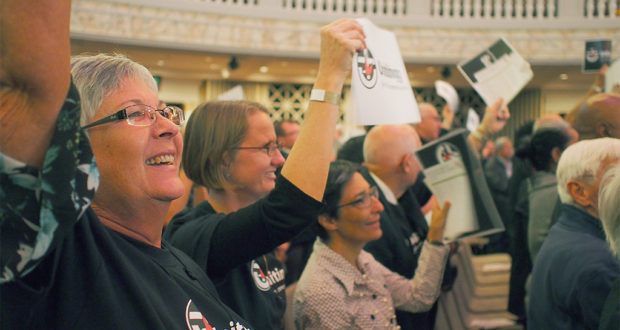 Grassroots change is happening in South East Queensland communities and the Uniting Church in Queensland is proud to be part of that change. Synod research and policy officer Sue Hutchinson reports on the founding assembly of the Queensland Community Alliance.

The founding assembly of the Queensland Community Alliance (QCA)—led by Queensland Synod moderator Rev David Baker—was held in September at Brisbane City Hall, with more than 1400 people in attendance, including dozens of Uniting Church members.

This growing movement is a coming together of people in local areas who would not usually know each other—members of faith communities, community organisations, unions and ethnic associations—to talk about their stories and work on solutions to common issues. The Queensland Synod and the Bremer Brisbane and Moreton Rivers Presbyteries are committed to this important initiative.

“This has been really helpful for me. I have engaged with people I would not have met before, and come to admire their commitment, passion and discipline. This is perfect for the Uniting Church. I’ve seen a process unfold—and it does take commitment—and local issues being addressed. We now have new allies in influencing leadership for the common good.”

Rev Gwen Fisher was part of the excitement at the Brisbane event.

“The City Hall came alive with the coming together of faith groups, unions and community groups to demonstrate our ability to influence decision-makers on issues that concern us. It was encouraging to see such a large contingent from the Uniting Church coming together and engaging with community for the common good.”

Rev Dr Rob McFarlane from the Moreton Rivers Presbytery has been involved for several years. “I find the relational meetings very useful, connecting with individual people and finding out what they are passionate about,” says Rob. “This process is great for nurturing and encouraging new leaders, giving them new skills and helping them to act directly in their local community and beyond.”

Queensland Premier Annastacia Palaszczuk was among the many who heard people’s moving stories about
caring, and employment and training. She formally recognised the QCA and committed her government to working with the alliance and to meeting personally with representatives.