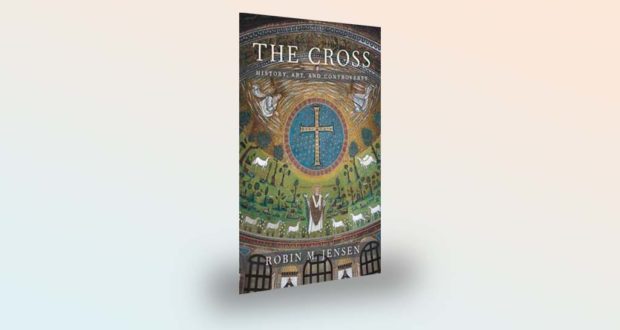 It is arguably the most famous item in Christian iconography but Robin Jensen’s book The Cross attempts to uncover the history behind the crucifix and the controversy behind the symbolism. Nick Mattiske reviews.

We associate the cross with Christianity, so it is surprising to note, as Robin Jensen does in this elegantly produced book, that for the first decades, even centuries, of the church other symbols were far more prominent—fish, anchors, ships and doves. And frescoes were more likely to feature other episodes from Jesus’ ministry and life, such as his baptism, rather than his crucifixion.

For the earliest Christians the cross was a reviled image, which is why St Paul has to persuade his readers not to be ashamed of it but to see its significance. For Paul, paradoxically, the means by which Jesus is humiliated becomes for us a celebration. The adoption of the cross as a symbol simply proved to pagans and Jews how nuts these Christians were.

Once it became a well-used symbol, it was malleable. It could be associated with ships and builders’ tools, and it represented the four points of the compass. It would also be closely associated with Eden’s Tree of Life, a symbolism refined and embellished over the centuries. In the Middle Ages a legend developed that the cross was actually made from wood from the Tree of Life, because it was thought the wood itself must have been in some way special.

Origen wrote that the cross shouldn’t be thought of as magical, but after Constantine’s conversion and his mother’s implausible discovery of the relic of the True Cross, this is exactly what happened. It seems the hunger for talismans is almost inextinguishable. Pieces of the True Cross, which could magically duplicate, were used for healing, taken into battle and housed in elaborately jewelled containers.

It seems impossible, writes Jensen, that crucifixes, as opposed to empty crosses, only appeared after the ninth century, and then they featured a defiantly living rather than dying Jesus. As the importance of focusing on Jesus’ suffering developed, crucifixes became more realistically gruesome. In the East, they thought this was a problem, as theses crucifixes took away from the importance of the resurrection.

Luther thought contemplating Christ’s suffering, as our liberation, was appropriate, but for Zwingli and Calvin crucifixes were part of all that Catholic superstition and their followers burned and smashed them along with the statues of Mary and the saints.

Jensen’s book covers mainly the ancient and medieval worlds, with modernity glossed over in a mere few pages. But the cross remains a controversial symbol.

In China the government removed external crosses from churches, only to have lawyers challenge the practice. As has been well-publicised, wearing a cross on the job can get you fired in Europe. And in our mainstream media the image of a cross silhouetted against the sky inevitably refers to dark, scandalous behaviour within the church, turning the cross once again into a symbol of pain and shame.