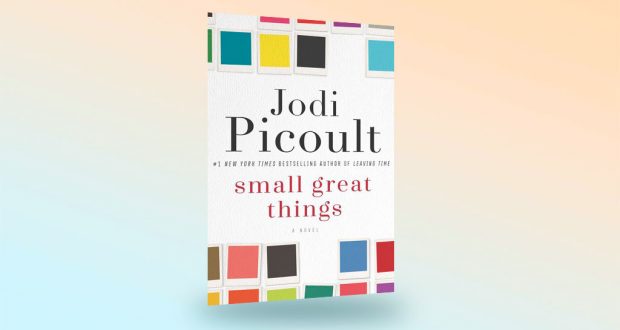 With a slew of awards and best-sellers to her name, Jodi Picoult has explored serious issues such as religion, the death penalty, gay rights, the Holocaust and school shootings in previous novels but Small Great Things is her first to deal with race. Sue Hutchinson reviews.

In Small Great Things Jodie Picoult challenges her readers to the core, confronting the racism that is deeply embedded in our society and indeed, our own selves.

Ruth Jefferson is an African-American woman working as an experienced midwife in a small cottage hospital in Connecticut. Her 17-year-old son Edison is a high achieving student at high school, and he is getting set to begin a college education. Ruth’s mother has worked for decades as a maid for a wealthy white family, who consider her “part of the family”, except not really …

One day Ruth is assigned a family to care for, whose baby boy, Davis, has just been born. Ruth is feeling the tension in both Davis’ parents, Brittany and Turk Bauer, when the bombshell drops.

“Get away from her,” Turk Bauer says. “I want to talk to your boss.” Later he says, “I don’t want anyone who looks like her touching my son.”

A note is affixed to Davis’ chart which reads, “No African-American personnel to care for this patient.” Ruth is the only person working at the hospital who fits that description.

A few days later, there is an emergency in the ward and Ruth is left alone to supervise little Davis after his circumcision. He has a cardiac arrest and as Ruth’s professionalism kicks in she tries to resuscitate him, despite the order on his chart. He dies and Ruth is charged with negligent homicide.

Kennedy McQuarrie, her state-funded lawyer, refuses to consider raising the issue of race in court, even though it is at the heart of the whole case. She and Ruth learn more about each other as the case progresses. Their lives are very different. Kennedy is a professional white woman who does not consider herself racist at all. Ruth and her family are confronted by the realities of racism every single day.

This enthralling story is told from the standpoint of three of the characters: Ruth as the African-American nurse who has tried to live her life as though her race does not matter, Turk as the white supremacist whose attitudes and actions are appalling, and Kennedy as the well-intentioned white middle-class lawyer.

The reader watches as they each wrestle with the aftermath of Davis’ tragic death, and as their individual philosophies become clear. Kennedy struggles as she comes to recognise institutional racism, its devastating impacts on black people every day of their lives and her own unconscious part in this. As she does, the reader is also forced to look deeply into their own prejudices and attitudes toward race, privilege and justice.

This is a fantastic read—riveting and fascinating right from the first pages. Jodie Picoult has done extensive research including many hours of interviews with black women and white supremacists, and has created colourful characters who are very real.

Although this book is clearly set in America with their particular problems related to race, these are universal themes and highly pertinent to Australian society. As the Uniting Church has a special relationship with its Aboriginal and Torres Strait Islander sisters and brothers, this exploration of white privilege makes essential and important reading for these holidays, or any time. Highly recommended.