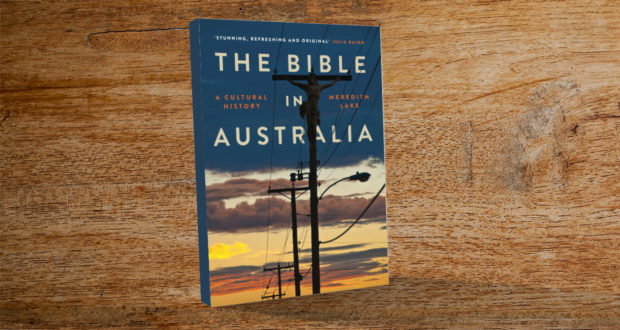 The “Good Book” has played a crucial role in shaping Australia’s modern history, from its arrival on Australian shores via the First Fleet through to its influence on politics in the 20th century. Meredith Lake’s latest book The Bible in Australia explores the history of the nation and how the Bible has been a mainstay of Australian society, touching the lives of rich and poor, Indigenous and immigrant. Nick Mattiske reviews.

While the Bible was an important part of the culture of Australia’s British colonisers, the history of the Bible in Australian culture is as much a history of counterculture, as Meredith Lake’s commendably comprehensive coverage shows.

It is no surprise that when a country that identified itself as Christian—Britain—sent convicts to Australia in the First Fleet they also included a crate of bibles. Although Australia, unlike the United States of America, was not settled by Europeans for religious reasons, the Bible was part of everyday British life, as well as a tool for rehabilitation of prisoners, even if some officers didn’t really believe it, and some convicts tore up bibles and put them to other uses.

Biblical texts were well-known by convicts, many even sporting the texts as tattoos. More deeply, some identified with biblical characters, many of whom were travelers and exiles, and the Bible’s proclamation of God’s love for the oppressed and outcast gave hope. The Bible was, Lake says, “both a tool of imperial oppression and a text of liberation”.

Missionaries in the 19th century noted that the colonisers did not always live up to Christian ideals, but German missionaries, for example, took an interest not only in spreading the gospel but also in the riches of Indigenous culture. They were pioneers in translation work, which helped Indigenous languages survive, often against colonial Anglicans who insisted that the Bible should be read in English, as that was the language of the new Australian “civilisation”.

Against the imposition of civilisation, which often simply meant displacement, Indigenous Australians found inspiration in the Bible, as did black Americans. Bibles in Indigenous languages created the realisation that “white man’s culture is not Christian culture”. The Bible spoke of a common humanity, especially against Darwinist racial theories that were prominent in the later 19th century, and religious ministers, too, denounced settler injustices, such as at Myall Creek, in just these terms.

In the 20th century the Bible continued to have an ambiguous place in a society that upheld God, king and country, exemplified by the curious story that pacifist dissenters in the first World War were permitted the Bible in prison, but found the pages with the Sermon on the Mount torn out.

Lake notes that the Bible is probably more prominent on Anzac Day than on any other, reflecting perhaps a long-term association of the Bible with conservative values, though as with the jailers of the WWI pacifists, that sometimes requires selective reading. And recent church activism supporting refugees makes a contrary case.

There are passages in the Bible that put the brake on modern individualism and encourage order in society. But there are also parts that are “disruptive”, as is evident from the recent history of activists and artists who, away from the mediation of the church, find themselves rocked spiritually by what they read in the Bible when they actually open it. Some dismiss the Bible because they think they know it, but it continues to surprise.

In her last chapter Lake touches briefly on aspects of the Bible’s place in the new millennium, such as Bible-reading apps and refugee advocacy. There is more to be said, and more changes to come, with Bible reading now as specialised as reading the Greek classics, while, on the other hand, the rise of Christianity in Asia and the global south means biblical literacy will be part of the fabric of future Australian immigration. A book similar to Lake’s in a hundred years’ time might have as surprising a story to tell.