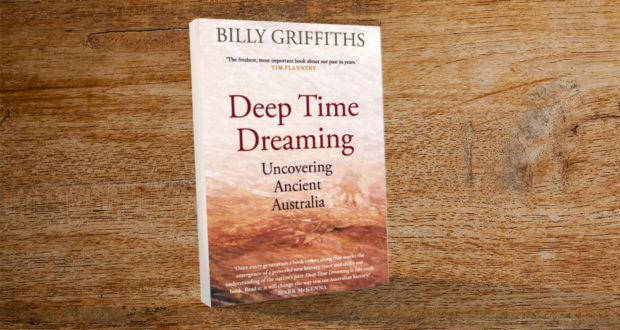 Billy Griffiths’ latest book Deep Time Dreaming uncovers the role archaeology has played in shaping our understanding of Australia’s vast history, particularly in relation to Indigenous culture, and what this means for contemporary relations between Indigenous and non-Indigenous Australians. Nick Mattiske reviews.

In the 1960s the archaeologist John Mulvaney was told by the ABC that there would be “no interest” from the general public in his discoveries of 17 000-year-old Indigenous artefacts from a dig in South Australia.

Times have changed, but non-Indigenous Australians still have an “uneasy relationship” with Indigenous history, according to Billy Griffiths, though he hopes that we will see further positive change.

This discord is epitomised by the campaign in the 1980s to stop the damming of Tasmania’s Franklin River. Opposition centred on the heart-stirring images of the wilderness’s beauty, but the High Court decision to stop the dam was taken primarily because significant Indigenous cultural artefacts had been uncovered in a cave in the area (despite the Hydro Commission conveniently seeing nothing of worth in a pile of old stone tools).

The work of archaeologists was vital to this discovery, and therefore the salvation of the wilderness, but Indigenous Tasmanians felt uneasy about digging up sacred ground and eventually blocked access. Antagonisms simmered over the question of who owns the past, with archaeologists arguing that study of the site was good for the nation and the world, whereas Indigenous people wanted control over what they saw as their family heritage.

Something similar happened with human remains uncovered at Echuca, and at Lake Mungo in NSW, where the dates of human occupation were further pushed back (Griffiths’ book is also a chronicle of the continual revaluation of the dates of occupation of Australia). The remains were eventually reburied, and this likewise became an issue of “artefacts” being available for scientific study versus cultural integrity and the dignity of buried ancestors.

Despite their good intentions, archaeologists have often trod heavily. Rhys Jones was a pioneer of Tasmanian archaeology and he highlighted Indigenous culture and was indignant over its destruction. But he was criticised by Indigenous Tasmanians whose presence clearly refuted his claim that they had died out. Elsewhere, anthropologists have got into trouble for publishing culturally secret Indigenous information in the interests of science.

As Griffiths says, because Indigenous culture is a living culture, it doesn’t always fit neatly with contemporary Australian society, which is influenced by Western ideas of progress. He notes that there is an often implicit condescension in the use of the term “hunter-gatherer”, and even recognising that Australian Indigenous societies included what we would recognise as farming may unintentionally validate hierarchies of civilisations.

Such are the pitfalls of writing Indigenous history. Griffiths notes that it is difficult to not make generalisations about a myriad of societies and their practices, and about a culture that did evolve, rather than assuming Indigenous Australian culture was, like the Wollemi Pine, an unchanging survivor from a long-lost age.

The positive aspect of Griffiths’ story is that archaeology also evolves. Recent excavations in Arnhem Land have been more collaborative, and Griffiths notes how scholars, often female, have studied Indigenous relationships to land, ecological perspectives, and cultural and trade connections across communities, including the annual inter-clan harvest of Bogong Moths in the high country.

Griffiths’ enthusiasm for the practice of archaeology and the knowledge it has given us about Indigenous culture shines through. He suggests that the careful uncovering and embracing of our deep past is something that enriches all Australians and helps us come to terms with this land we inhabit.