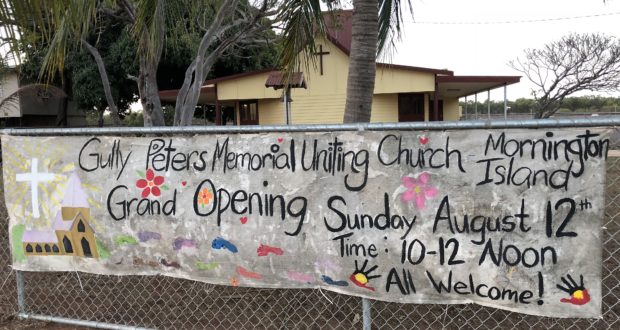 I’ve spent the last couple of weeks in far North Queensland at the opening of the re-built Gully Peters Uniting Church on Mornington Island, and then “Walking on Country” with Rev Richard Cassady, some Synod leaders, and the team from “Australians Together”.

Mornington Island is the home of Lardil peoples. It is also now home to the Kaiadilt peoples from nearby Bentick Island, and the descendants of children of European and First Peoples descent who were forcibly removed there in the 20th century.

The Uniting Church in Queensland has an ongoing commitment to the First People’s communities of the Western Cape and the Gulf, since they were established as missions in the late 19th and early 20th century.

Since the 1970s and 1980s, when the Queensland Government took them over, and established them as Local Authorities, the Uniting Church in Queensland has supported the communities through appointing ministers and establishing the Calvary Presbytery.

The existing church on Mornington Island was built in the early 1980s and was in need of major repair and renovation.

The church is named after Gully Peters, Gangurrumungalen, an elder of the Lardil peoples, who was instrumental in saving the lives of the family of Rev Robert Hall after his murder in 1917. Gully Peters was a leader in the community and in the church until the early 1980s.

Faithworks Uniting Church, incorporating the congregations of Norman Park and Coorparoo, came to the party to support this work. Rev Linda Hanson—former minister at Faithworks—and Mr. John Lonergan came with me to celebrate the completion of the renovations.

Rev Gewa Au and his wife, Cynthia, have been in ministry on Mornington Island since the beginning of the year; it’s challenging work. Gewa and Cynthia both have experience in community development, so they bring some expertise to the ministry there.