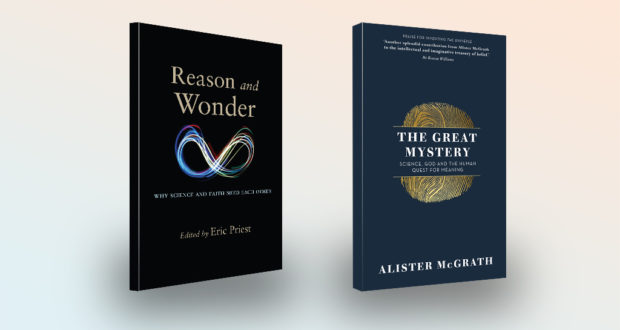 Although some might see an irreconcilable tension between science and religion, the quest for knowledge and meaning lies at the heart of both. While our understanding of the universe and humanity is constantly evolving as scientific breakthroughs occur, where does religious faith sit in our thinking? Nick Mattiske explores the big questions of science and faith in two books on the topic.

Alister McGrath is the anti-Dawkins. Much of his recent prodigious output is a response to the so-called New Atheists.

Not only does McGrath turn their own arguments against them; his history as a former atheist and scientist, and now theologian and historian of religion, means that he has the enthusiasm of the convert, as well as an understanding of why the stridently atheist viewpoint is narrow-minded and personally unsatisfying.

The New Atheist view of science tends towards the outdated Enlightenment one—rational and disinterested—a view contested not only by the religious, but by postmodern theorists, who highlight the difficulty in keeping personal bias and ideology out of scientific endeavour. It is also good to remember that scientific orthodoxy changes.

McGrath’s The Great Mystery argues this, as well as for the value of multiple perspectives. Science needs openness to other points of view, not the closing off of possibilities.

The universe is gloriously mysterious, something most atheists agree with, which should then give pause to any smug feelings of certainty. To doubt that there is a God may be a valid response to mystery. To insist one knows there isn’t, and that science answers every question, is simply myopic obstinacy.

McGrath’s book is also an apologia for the search for meaning in our lives, which is not a red herring just because it can be beyond science to provide such a thing, and because subjectivity comes into it.

Indeed, the way we discover meaning in our lives differs from scientific method. There are times, says McGrath, when being a detached observer is helpful for understanding, and times when being in the midst of something helps.

Seeking knowledge and meaning is a starting point for both religion and science, and that idea underpins much of the writing in the collection Reason and Wonder.

The book’s essays, on origins, reductionism, the problem of evil and more, proclaim that science and religion are not the rivals simplistic histories and polemics make them out to be, and that a dialogue between the two enriches both. This would be no surprise to those enthusiasts in the 17th and 18th centuries who pioneered the modern scientific project. They knew that how and why questions are equally valid.

Reason and Wonder: Why Science and Faith Need Each Other
Editor: Eric Priest
Publisher: Templeton Press
2017
To purchase visit here